How To Grunt Up A Buck 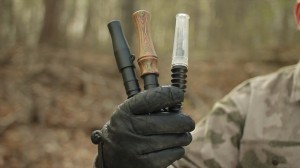 One afternoon in Iowa, Pat Strawser sat in his stand and watched some does and small bucks enter a picked cornfield. A heavy 7-pointer popped into view, followed by more does. “I was trying to keep track of all the deer when a huge buck strode into the field,” said Pat. “He pinned his ears back and marched toward the Big 7.”

The hunter grabbed his grunter and went to work. He called several times–nothing. Gradually he increased the volume and intensity of his calls until both the mature bucks picked up their heads and looked his way. “They were about 125 yards out,” says Pat. “Once I had their attention, I gave even louder grunts and then a snort-wheeze. Finally the biggest buck turned and started marching toward me!”

The giant came to within 40 yards, stopped and worked a scrape. Then he grunted, blew a snort-wheeze and walked closer. Pat drilled the hoss, which weighed 285 pounds and had a 151-inch rack.

Pat’s hunt sums up grunting pretty well. Your first calls might fall on deaf ears. But keep grunting…mix up your calls…crank it up… Sooner or later you’ll strike the right chord, and a buck will march into bow range. To make it happen, try the Big Deer grunting plan.

Say you’re sitting a stand, watching a hardwood ridge or creek bottom. It’s serene and beautiful, but no deer are moving. Well, shake things up. Pick up your grunter and blow four or five “contact grunts” every 20 or 30 minutes. Dr. Karl Miller and others at the University of Georgia did a whitetail vocalization study, and found that does utter this common call when they become separated from one another. Their studies show that these short, single grunts are fairly loud (deer grunt loudly enough so that other animals 50 to 100 yards away can hear them) and of moderate intensity and high pitch.

The “low grunt” is similar to the contact grunt, but more guttural. Scientists say both does and bucks use these single, low-pitched grunts to show aggression toward other deer. In other words, if a buck happens upon another animal and doesn’t like its looks or smell, it might posture and grunt low at it. 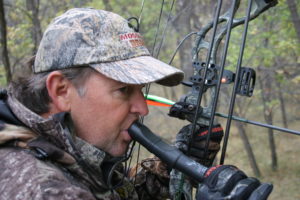 Blow some of these antagonistic grunts and you might prod a buck to come check you out, especially later in October and into the rut. To make the low call, cup your hands around the end of the tube and grunt air up from your chest.

While the science behind contact and low grunts is interesting, you needn’t try to mimic each particular one. A buck is just as apt to come to one grunt as the other, so the best strategy is to mix it up. One day as you hunt, blow a series of five or six short, snappy contact grunts. Twenty minutes to an hour later try four to six low grunts with a more guttural tone. No matter which brand of grunt tube you use, it is easy to vary your calls from sharp to guttural with just a bit of practice with your air flow.

My favorite call, and the one that dupes the most big bucks across America each November, is the “tending grunt.” Biologist Mickey Hellickson says, “These low, guttural grunts are most commonly made when a buck is tending a doe in heat, but bucks will also make this call while traveling alone in search of does.” He says that tending grunts are most often made by dominant bucks and less often by younger bucks.”

Start using tending grunts around Halloween, and keep them up for the next two or three weeks of peak rut. Blow loud, strung-out grunts that sound like urrppp, urrppp, urrppp every 30 minutes or so while on stand. To me, five- to 10-second sequences of tending grunts seem most realistic, but there is no rhyme or reason to it. A buck looking to fight or steal a rival’s hot doe is apt to roll in.

During intense encounters in the rut, bucks sometimes “grunt-snort,” which consists of the low grunt we talked about earlier, followed by one to four short, rapid snorts. Further, rival bucks sometimes add a third element, an expulsion of air through their nostrils, thus the “grunt-snort-wheeze.”

“The grunt-snort-wheeze is the most aggressive of all the deer calls, often made by bucks just before a fight,” says Karl Miller. “Hunters can use it to bring in a dominant deer, but it can also scare off some bucks.”

While there is no doubt the snort-wheeze can produce dramatic results and bring in a big buck in the rut—it was part of Pat Strawser’s routine in the hunt story that opened this post—I don’t use it very often. I prefer to blow tending grunts, which to me are more consistently effective and not nearly as threatening to all age classes of bucks that roam in my hunt area.

You can buy a specialty snort-wheeze call, or simply wheeze by mouth, which to me is more fun. Cup your hands around your mouth and bring air up from your chest to sound like pfft, pfft, pfftttttttteeeeeem.

Thus far we’ve alluded mostly to “blind calling”: sitting in a stand with no deer in sight, and grunting every 30 minutes or so in hopes of making something happen. This is your basic strategy for most days, and if you keep trying it you will call in some deer. But that said, grunting is most effective when you spot a buck first and then go to work.

Grunt at every buck, both shooters and small 4- or 6-points, that you see slipping down a ridge or ducking into cover up to 125 yards away. In my field-testing, a deer can hear your calls that far if the wind and terrain are right. The more bucks you see and call to, the more you learn from their reactions.

When a buck hears your grunts, 7 times out of 10 he will stop and look your way. Sometimes he might stand there and stare, but more likely he’ll drop his head and continue on his merry way.

Okay, now grunt at him again, louder. Vary your calls from sharp contact grunts to guttural low grunts. If the rut’s on, cut loose a stream of your best tending grunts. Your third or fourth set of grunts might strike a chord and stop the buck. As a last resort, I might snort-wheeeze at him.

More times than not, a buck will move on, but that is okay. You’ve called to him and watched his reactions, and that is great experience. But on a few lucky hunts, a buck will eventually get curious and turn your way. Or, maybe you were blind calling and all of a sudden a buck pops out of a thicket 100 yards out. Now it’s on, and the fun really begins.

Don’t grunt much once you have a buck’s attention, and especially if he is looking your way. He might see you move your hands or bow…or he won’t see another deer over there, causing him to hang up or back off into the brush. Instead, when he cuts his eyes away, grunt a few times and just loudly enough to stay in contact with the deer and pique his curiosity even more.

Watch a buck, and if he breaks your way, do not call again. Let him walk, get your bow ready to draw and look for clear shooting lanes. Grunt again only if he loses interest and veers off course.

One day years ago I grunted at a 150-class giant that stopped, looked at me for a second and kept on moseying, like most bucks do. He topped a ridge and was gone before I could get off a shot.

A half-hour later, I heard crunching behind my stand. I swiveled my head and a deer started blowing at me. The same buck! He had walked on out of sight, but he must have gotten curious of my calls and snuck back in on the downwind and busted me.

That happens more than you imagine. Since that day, after grunting to a buck, I always keep my edge and keep watching, especially to the rear and downwind of my stand. I know of eight bucks for sure that have come on a belated and roundabout way to my grunts. Six of those bucks got away a second time, one I missed and one I killed. That 8-point wasn’t the biggest buck I’ve ever grunted in, but he is the most memorable.