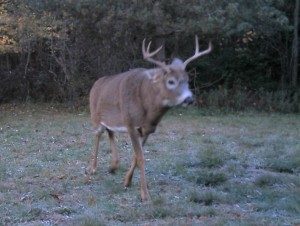 During intense encounters in the rut, bucks sometimes “grunt-snort,” which consists of a low, guttural grunt followed by one to four short, rapid snorts. Further, rival bucks sometimes add a third element, an expulsion of air through their nostrils, thus the “grunt-snort-wheeze.”

“The grunt-snort-wheeze is the most aggressive of all the deer calls, often made by bucks just before a fight,” says whitetail biologist Karl Miller. “Hunters can use it to bring in a dominant deer, but it can also scare off some bucks.”

While there is no doubt the snort-wheeze can produce dramatic results and bring in a big buck in the rut, it is not a call you should rely on frequently.  I much prefer to blow tending grunts, which to me are more consistently effective and not nearly as threatening to all age classes of bucks that roam in my hunt area.

You can buy a specialty snort-wheeze call, or simply wheeze by mouth and nose, which to me is more fun. Cup your hands around your mouth/nose and bring air up from your chest to sound like pfft, pfft, pfftttttttteeeeeem