Use Weather Change To Shoot A Big Buck 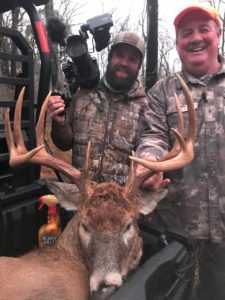 You’ve been hearing and reading that for years, and I’ve been researching, studying and blogging about it for decades.

Truth is, just when I think I’ve got the answer, I read another scientific study that blows up my best theory…or a big buck does something entirely different on a warm or cold day than what I expected.

But finally, I’ve got solid and foolproof advice on how you can use a weather change to kill a big buck. It comes as a result of a muzzleloader hunt in Virginia last week.

Let me set the stage. It was late pre-rut, leading into the peak, which has always been one of my favorite times to hunt…coming out of a full moon, last-quarter waning to new moon…unseasonably hot, with day highs in the mid to upper 70s, and nights 50s and 60s.

The local meteorologists said it was the warmest early November in 26 years in this area, and the 4th warmest November rut week on record.

In the heat, for the first 4 days of the hunt, all the deer activity was the first hour of daylight. Nothing moving midday, and NO deer sightings on food plots in the afternoons, not a single doe.

Three hunters sat mostly all day and saw NO mature whopper bucks. We did shoot two decent 125-class bucks wandering around at first light, so there was a bit of rutting, what I call “lonesome wandering,” going on early in the mornings.

On the 5th day it started to rain, lightly at first. This was a tropical front coming up from the South, and temperatures remained warm in the low 70s.

This initial rain changed things a bit. Another mid-range buck was shot in a clear-cut around 10:00 a.m. Yes, you can and should hunt in a light to moderately steady rain because deer will move.  But still no mature bucks, no chasing and no afternoon movement.

That night the bottom fell out, and it rained 2 inches, with some gully washers mixed in until noon on the last day of our hunt.

This is where the story gets interesting, and now I am going to tell you how to use a weather change to kill a big buck.

At lunch time the rain stopped, and the temperature dropped to 65. Still warm, but a 10-degree change for the better. Use a change like that to your advantage. My friend Jack and cameraman Christian headed for a box stand overlooking a food plot.

At 1:30 the first doe stepped out. Then 2 more does. A small 8-pointer came crashing out of the thickets and chased a doe out of the plot.

At 2:00 p.m. a buck I had nicknamed Corkscrew because of the curl on top of his left antler strode into the plot, then left again. He popped back out 15 minutes later, and as Jack was lining up the shot, the Screw broke for a doe and they disappeared.

Jack was disappointed but not for long. At 3:00, a full 2 hours before sunset, a 150-inch buck strode into the plot like he owned the place. Before he could crash off with one of the does, Jack fired a deadly shot. 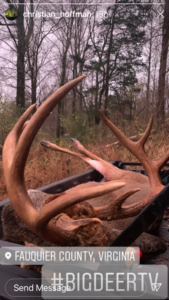 In that 2 hours of hunting, as the result of that rain and 10-degree temperature drop, Jack and Christian had seen more deer, more rutting activity and more mature bucks than the rest of us had all week.

Now here is critical part of the story.

Though our first buck tags were filled and we didn’t intend to shoot another deer unless a really big one showed up, Jack and I hunted the entire next day, which was clear, sunny and a bit cooler on the backside of the front. Perfect conditions, really.

Jack saw a doe. Two does and a spike came by my stand. That’s it. Not a hint of rutting activity or a glimpse of a mature buck.

The point: Most hunters, including me, figure that on the backside of a rainy and cool front, bucks will move well for the next couple of days.

Not necessarily. A good break in the weather often kicks deer into moving for only a few hours. If you’re not out there in your best stand immediately after the rain stops and/or the temperature drops, you might miss it.

Watch your weather app and be in position the minute the weather changes, because the next few hours can be your best shot.