5 Things To Know About CWD This Deer Season 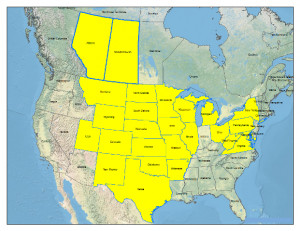 As Chronic Wasting Disease spreads in some regions across the country, state CWD rules and regulations are constantly changing. Keep these things in mind this season:

When to Test Your Deer

More than 315 counties in 24 states, from Wyoming to Mississippi to upstate New York (new on the list this year) have reported CWD in free-ranging deer. Has the disease been detected near where you hunt? An excellent resource is the CWD map at cwd-info.org which lists all counties in all states where CWD has been confirmed.

Check the map, and if you hunt in or near any region that has CWD you should have any deer you shoot tested. Each state’s hunting website has specific (if perhaps confusing) information on how and where to have an animal tested.

Use The Right Scents

Recently New Jersey became the 10th state to prohibit the use of natural deer urine to attract whitetails. Some other states with this law include Tennessee, Arkansas, Rhode Island, Vermont and Virginia.

Although controversial, the thinking of these states is that prohibiting the use of natural urine, which is collected from deer in facilities, will help minimize the potential for CWD introduction and spread.

In the aforementioned states, it is not only illegal to use natural deer urine, but also to possess it while hunting. If you hunt in one of these states, remove any natural urine/scents leftover in your day pack and replace it with new bottles of synthetic scents.

Unless you hunt a few miles from the house and don’t have to drive across a county or state line, the good old days of shooting a buck, loading the whole animal in your pickup and driving home are pretty much gone.

To minimize the risk of spreading CWD into new areas, most states have adopted new regulations regarding the transport of deer that hunters shoot. 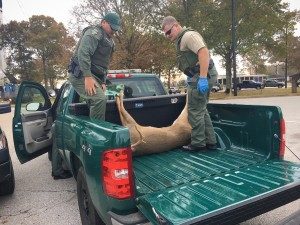 Since the infective prion that causes CWD is concentrated in the brain, spinal cord and lymph glands of deer, the most common regulation is to prohibit the importation of whole deer carcasses harvested from a CWD area into another county or state. Generally, most states do not allow the importation of any brain or spinal column tissue of any deer. Only the following may be transported legally:

Since transport laws are continually evolving, check the regulations in your home state and any state you plan to hunt. Also, and this is important, check transport laws of every state you will travel through with deer meat and parts as you return home from a successful hunt. All state wildlife agencies provide CWD transport information on their websites.

How to Butcher Your Deer

To minimize the risk of exposure to CWD, wear latex or rubber gloves when handling and gutting a deer, and boning out meat. Avoid sawing through bone, particularly the spinal column. Do not cut meat with a blade previously used to cut bone. Remove as much fatty tissue as possible. Scientists say many lymph glands are located in fat deposits under the skin of a deer.

A recent study by the National Institutes of Health found that a 5-minute soak in a 40% solution of household bleach decontaminated stainless steel wires coated with CWD prions. Scientists used the wires to model knives and saws that hunters and meat processors use on deer.

After butchering, soak your knives and saws in a 50/50 solution of bleach and water. Out of an abundance of caution, it couldn’t hurt for hunters everywhere to decontaminate their tools this way.

The good old days of butchering a deer and discarding the bones out in the Back 40 are also long gone in CWD areas. Among wildlife managers and scientists, proper carcass disposal is high on the list to minimize the spread of CWD.

Dispose of a deer skeleton and bones in one of two ways. Best is to bag the bones and dispose in a landfill, which creates a barrier between uninfected deer and waste that might contain infectious CWD material.

You can also bury a carcass and bones on private land. Bury deep enough so that scavengers can’t dig it up.

It is illegal to dispose of a carcass on public lands or roadways. Field dressing a deer and leaving the gut pile on public or private land is still permitted.