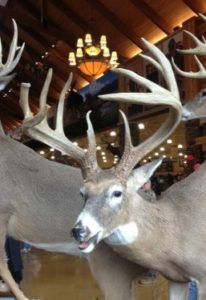 I snapped this photo of the legendary Jordan Buck in the Cabela’s store in Green Bay, Wisconsin. The picture does not do this story justice, for it is fascinating:

One day in 1914 near Danbury, Wisconsin, James Jordan followed huge deer tracks in the snow. A train roared by and its grind and whistle startled a group of deer, including a monster buck. James threw up his rifle and cracked off a few shots. His last bullet felled the giant.

Jim took the 400-pound buck to a local taxidermist. Little did he know he would not see his trophy again for 50 years. The taxidermist moved away and took the rack with him. In fact the guy moved several times, and James never could track him down. Traveling and communication were not easy in northern Wisconsin 100 years ago.

In 1958 a guy named Bob Ludwig bought the rack for $3 at a garage sale. It sat around Bob’s garage until 1964, when he decided to have it officially scored—206 1/8 net typical. Then, an incredible coincidence. Bob, a distant cousin of James Jordan, showed James the massive rack, knowing he was a big hunter. “I killed that buck!” James must have hollered.

Boone and Crockett declared the buck the world record in 1971. But it wasn’t until December 1978 that James Jordan was awarded status as the rightful hunter. Sadly, James passed away two months earlier and never knew he had been officially named the hunter who shot the biggest typical buck ever 64 years prior. 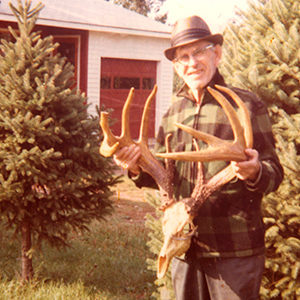 The Jordan buck had 30-inch main beams and more than 50 inches of mass measurements; longest tines were 13 inches. For a 10-point to score so high is amazing. The buck had only 3 2/8 inches of deductions.

The Jordan buck stood as the world-record typical until 1993, when Milo Hanson shot his monster in Saskatchewan.