How Much Do Deer Antlers Grow In August? 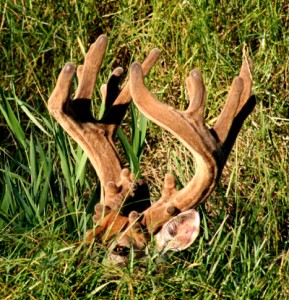 In early August velvet deer antlers begin to morph from soft and pliable to hardened bone. “A buck’s antlers will change from looking swollen or bulbous at the tips of the tines to a more normal diameter,” Missouri biologist Grant Woods told me. “Once this change in appearance occurs the buck won’t add much beam or tine growth.”

By mid-August most of the antler growth for the year is done. Sometime between September 1 and 15 bucks will shed velvet in most areas. The cue for antler hardening and velvet shedding is the change in photoperiod caused by decreasing daylight and increasing darkness, which results in a significant increase in the bucks’ testosterone.

Velvet shedding typically takes only a couple of hours, though it is not uncommon to see a deer walking around for day or two with bloody velvet tatters. Bucks have been known to turn their heads and peel or even eat dry velvet that dangles off their new racks.

Soon after shedding, the tree rubbing and antler-polishing begin. With their new crowns gleaming, bucks are ready and willing to breed the does for the next 3-4 months, until their testosterone begins to fade and the fascinating antler cycle begins all over again.