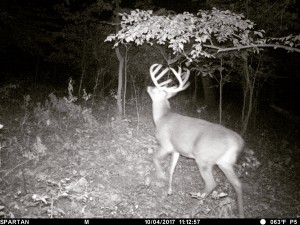 Researchers at the University of Georgia conducted a two-year study on a 3,500-acre property in the northern part of the state where the rut peaks in mid-November, as it does in most regions. The land was managed for a healthy whitetail population, and the age structure of the bucks was good. Those bucks were wild, and hunted by people. This was not another study of pen deer, but a real-world project that unearthed some interesting results.

Aiming their trail cameras at every scrape they could find, the researchers got reams of videotape and images of deer at scrapes. One major finding–while multiple bucks of all ages (in one case 13 different animals) might eagerly paw one set of scrapes, similar scrapes only 200 or 300 yards away might go stone cold at any time. This explains much of our futility in the past. We found a good-looking scrape, hung a stand and hunted sign that the deer had abandoned for whatever reason.

Don’t waste your time on unproductive scrapes anymore. In early November when the serious scraping begins, cover ground and find as many pawed areas as you can. Monitor the scrapes for several days to a week, with both ground scouting and trail cameras if you can, and hone in on the ridge or bottom where bucks continue to move and dig more scrapes. Look for ovals that grow bigger and are pawed to bare dirt. Look for new rubs and big tracks. If the bucks are rutting hot and heavy, you’ll smell them. Play the wind, set a tree stand and you’ve got a good shot.

And if you get lucky and get a cam image of a giant at one of those hot scrapes, you’ve got a great shot. Move in with a stand and hunt him tomorrow and for several days.

Hunter and biologist Dr. Mickey Hellickson has done some research that will help you further hone in on the hottest scrape spots. Having conducted trail-camera surveys from Texas to the Midwest for many years, he’s charted, cross-referenced and analyzed tens of thousands of buck photos against aerial photos and maps.

Mick’s data clearly show two terrains where older-age bucks move and scrape in the rut: the intersections of two or more drainages, and the junction of two or more timbered fingers deep in the woods. “The thicker the cover in and around either of these intersections, the better,” adds the hunter-scientist.

Check your maps for terrain junctions like this. Some of the spots will be very defined and evident, others more subtle. Ground scout and set a tree stand downwind of the bottleneck with the tightest cover and the most active scrapes (big shiny rubs nearby are good). Pack a lunch, sit all day and watch for a giant moving in or around the scrape-laced funnel.

If you took 2 results from that aforementioned Georgia study at face value–85 percent of all scraping occurs at night, and a 3½-year-old or older buck is rarely observed at a scrape—you’d be inclined to join the crowd that boycotts scrapes. But not so fast; read between the lines for some useful data.

When analyzing the time codes on their trail-cam images and video reels, the researchers noticed that a flurry of heavy scraping occurs right at or just after dusk on many early-November days. Hmm…so scout for a doe trail, draw, ridge funnel, etc. that connects a thick bedding area with a food source, like corn, beans or acorns. The more scrapes along that trail or in that funnel the better. Set up 100 to 200 yards or farther off the feed and at least halfway back toward the bedding cover. A big deer might pop out of the cover at dusk and work a couple of scrapes near his bed before moving out toward a feeding spot. Perched back in the cover, you might pull an ambush in those last five glimmering minutes.