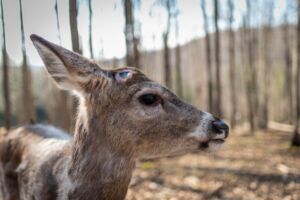 Cody emailed the other day: “Mike, haven’t found any sheds yet, but a guy doing drives with us the other week shot what appeared to be a doe but when we got to the deer it was obviously a young buck that had already dropped his antlers.”

This is no big deal, an honest mistake, and most state laws about late season hunting take this possibility into account. But I use the anecdote to point out that bucks seems to be dropping their antlers earlier than usual in many areas, including here in the Virginia Piedmont. Lots more bone will fall off the bucks’ heads in the more usual shedding weeks of January, which is when late antlerless seasons are still open in some areas.

You don’t want to mess up, so doubly identify your target. Surely you won’t shoot a mature buck sans antlers, he would look too big, heavy and thick for a doe. But on younger bucks (1 or 2 years old) that might be mistaken for an adult doe, look close. Glass the head long and hard for bases where antlers might have been. You’ll be able to see raw pedicles where last year’s antlers recently shed. Be doubly careful on long shots, or quick “drive shots” in the brush.