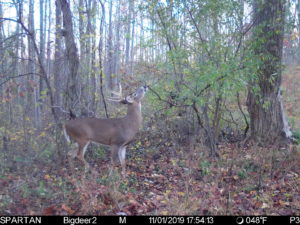 Bucks are hammering scrapes right now in the Virginia pre-rut and all over the country…perfect time for the ultimate guide on scrapes:

It’s been 20 years since scientists at the University of Georgia’s Deer Lab conducted a study on whitetail buck scrapes, and to this day it is regarded as the ultimate research ever done on the most alluring of all deer sign.

The study’s findings are still relevant today, and will be 20 years from now. A scrape is a scrape right? Whether a buck pawed it 10 years ago or this morning or November 2040.

The 2-year study carries weight with me because it dealt not with captive deer, but with wild, free-ranging, hunted animals. It was conducted on a 3,400-acre tract in northeastern Georgia that had been in a Quality Deer Management program for a decade. The buck-to-doe ratio was well-balanced and the age structure of the bucks was good. This allowed researchers to observe the scraping behavior of bucks of all ages.

The first year of the study, using video trail cameras from October 7 till February 21, the researchers monitored six traditional scrape sites that deer had used heavily in previous years–four along field edges and two deeper in the woods. In year two, their trail cameras whirred at scrapes from August 27 until February 6.

In north Georgia the peak of the rut occurs during the first three weeks of November, as it does in most Central and Northern states. Thus, the data regarding the monthly and weekly scrape usage of bucks in a typical fall is representative of most parts of the country, except the Deep South.

The study produced miles of videotape, reams of photos, hundreds of deer sightings and intriguing results.

Note: The research suggests that older bucks either check the scrapes from downwind, or avoid them altogether because of trail cameras. There is no doubt that a mature buck will circle downwind of a scrape and whiff the air and lip-curI, I have watched animals do it many times.

But, today’s no-flash trail cameras are smaller and quieter that those the scientists used 20 years ago, when clunky cameras sometimes spooked deer. This must be factored into the findings. I would bet that some mature bucks would have been videotaped at scrapes had the scientists had quiet IR cameras 20 years ago.

WHAT IT MEANS FOR HUNTERS

Here are a few ways to play off the study’s findings and work it into your strategy.

The researchers noted that heavy scraping occurs right after dusk in the pre-rut. So scout for a trail or funnel that connects a bedding area with a food source like corn or acorns. Set up 100 to 200 yards off the feed and back toward the bedding cover. Your goal is not to shoot a buck with his nose stuck in a scrape, but to shoot a buck prowling nearby.

The study’s major finding that multiple bucks, as many as 13 different ones, use the same scrapes should give you hope. When you sit in a scrape-laced area, you’re not watching for just one buck. You never know what might cruise by. While most bucks come at night, you do have a fighting chance of catching a shooter at dawn or dusk.

Finally, the UGA study shows that from late November through December 10 or so, some bucks re-check scrapes as they try to hook up with the last estrous does. Go back and hunt a ridge or bottom laced with scrapes you found earlier in the rut and you might strike pay dirt yet.