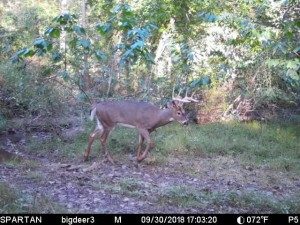 I’m a big fan of Penn State’s Deer-Forest Blog. It’s science-based and consistently provides practical and relate able information for wildlife observers and hunters alike. In this recent post the researchers talk about deer behavior in big woods on public lands. Many of you hunt that type of habitat and those tough bucks. Here are a few highlights you need to remember:

Having tracked GPS-collared deer for years in big, rough, hunted woods in Pennsylvania, the researchers say that one critical learned behavior of deer is to find safe zones where they avoid hunters.

When deer are disturbed, they do what deer do–run away. If they run to a spot where they don’t get disturbed again, then they will run back there next time.

Bucks do something similar, but maybe even more devious. Their hiding spots tend to be on ridgetops with a steep slope to the east or south.

They’ve found that deer move less to avoid hunters, especially in rifle season. While you’re sitting still in your tree stand, they are lying still in their hiding spot. The home ranges of deer in the study area average about 1 square mile (640 acres) for both does and bucks outside the rut. But during rifle season, the researchers say the deer average moving only 100 acres!

Their studies have found that deer don’t really go nocturnal like many of us believe, and that bucks generally exhibit more movement in the afternoon than the morning.

Finally, don’t let a little rain and wind stop you. They say a reasonable amount of rain and wind have negligible effects on deer movement, so go hunt.