Sheds to Velvet: How Deer Antlers Grow Each Year 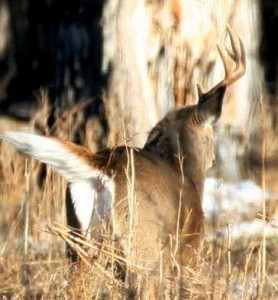 One time on a cold, steely day in January, I sat in a tree hoping for last-ditch crack at a buck, or at least a shot at one more doe for the freezer. As the gray blanket of dusk settled into the grain field I watched, an 8-point buck snuck out of the timber, nose to the wind, wary after four months of human intrusion in his woods. Satisfied the coast was clear, the survivor took a few more steps and hooked a sapling on the field edge.

That’s when the left side of his rack fell off his head.

In all my years in the woods, I had run across a few one-antlered bucks, but this was the first time I had actually seen a buck shed an antler. What are the odds of that? I’ll probably never see it again. It was a cool thing to see and it got me to thinking: As the old racks fall, the amazing antler cycle begins again.

Out With The Old

Why do bucks spent so much time, energy and nutrition growing a wonderful rack of antlers each spring and summer only to cast them in the winter?

“Scientists have pondered it for years and we still don’t know exactly why,” says biologist Dr. Mick Hellickson, who points to a couple of theories.

Some scientists say bucks shed so they’ll have the potential to replace damaged antlers. If a buck had to live his entire life with snapped tines or a broken beam he couldn’t fight his rivals or posture for does, so he grows a shiny new set before the breeding season each year.

A second theory suggests that bucks cast old antlers and grow new ones that may be 10 to 20 inches larger the following year to keep pace with their increasing body weight and girth as they mature to 3½ years of age, 4½ and so on.

After last fall’s rut, bucks’ decreasing testosterone levels cause an abscission layer to form between antlers and their pedicles. As this connective tissue gradually dissolves, antlers begin to get loose and eventually fall off.  Bucks may cast their racks from late December in northern latitudes through March and even April farther south. It varies across North America, but most antlers fall off in January and February. 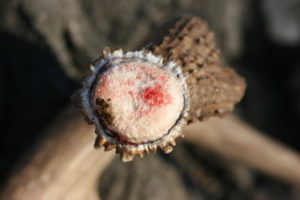 Cold weather, snow, altitude and food availability can influence when bucks lose their antlers. If your area had a noticeably early rut the previous fall, bucks’ testosterone will decrease earlier, and some of them might cast their racks two to four weeks earlier than normal. In the North, a severe winter may cause stressed deer to shed earlier than usual.

According to Hellickson, the specific time when a buck sheds may be determined heavily by his individual antler cycle. This cycle is independent of other bucks in the area and is probably centered on each animal’s birth date. As a rule, older bucks shed earlier than younger ones.

Interestingly, some people once believed that bucks withdrew to secluded places to shed their antlers away from does and rival bucks, thus avoiding loss of virility in the public deer world. But that is probably an old wives’ tale. Today’s biologists say that deer are likely unaware of when and where they’ll lose their headgear. Old antlers are apt to plunk off a deer’s head anywhere.

In With the New

In April, as the days get longer and the light increases, new antlers begin to grow from buds that form on the pedicels on a buck’s head. Typically within a month, main beams and brow tines begin to sprout and split off. A month or so later, second and third tines will form.

Throughout early summer, the fledgling racks grow fast and furious. Antler tissue is the fastest growing tissue known to man. Beams and tines may grow a quarter-inch or more per day, the process driven by a buck’s hormones and the photoperiod of the days.

According to Missouri scientist Dr. Grant Woods, a buck’s rack will show most of its points by mid-June, though tine length is typically less than half developed at this time. Most of the beam length will grow by late June. 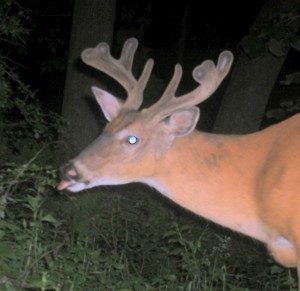 Those are the general rules, but Grant points out that the growth of individual racks can vary. “Some bucks will show a lot of antler growth early, while others seem to add a bunch to their rack during July,” he says.

Here are some more interesting facts about summer antlers:

–Antlers are made of bone, consisting mostly of calcium, phosphorus, magnesium and other minerals. Although some of the minerals needed for antler growth are taken from food, scientists note that lot of them are sucked from the buck’s skeleton, which may cause him to develop osteoporosis during the summer. Setting mineral licks for the deer can help.

–Throughout June and July, velvet antlers have a complex system of blood vessels that causes them to be hot to the touch. Dr. Woods notes, “There is so much blood carrying protein and minerals to a buck’s antlers that even small antlers are easily detected by thermal imaging devices. Tines show up like neon signs when flying over with thermal cameras in summer.”

–Sebum, a semi-liquid secretion, on the hairs gives the velvet a shiny look. Sebum also acts as an insect repellent to keep biting flies off a buck’s rack and face.

In early August antlers begin to morph from soft and pliable to hardened bone. “A buck’s antlers will change from looking swollen or bulbous at the tips of the tines to a more normal diameter,” notes Woods. “Once this change in appearance occurs the buck won’t add much beam or tine growth.” 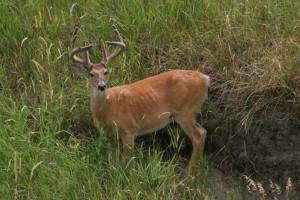 By mid-August most of the antler growth for the year is done. Sometime between September 1 and 15 bucks shed the velvet. The cue for antler hardening and velvet shedding is the change in photoperiod caused by decreasing daylight and increasing darkness, which results in a significant increase in the bucks’ testosterone.

Velvet shedding typically takes only a couple of hours, though it is not uncommon to see a deer walking around for day or two with bloody velvet tatters. One last thing you might not know: Bucks have been known to turn their heads and peel or even eat the dry velvet off their new racks.

Now the tree rubbing and antler-polishing begin. With their new crowns gleaming, mature bucks are ready and willing to breed the does for the next three months, until their testosterone begins to fade and the fascinating antler cycle begins all over again.