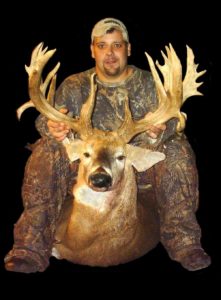 Back around 2007, Muzzy Broadheads introduced the “200 Club Monster Buck Display.” This select club highlighted a group of bowhunters who had recently harvested a whitetail buck that scored more than 200 net inches with a Muzzy broadhead. According to Muzzy at the time, fewer than 2 percent of all Boone & Crockett and Pope & Young certified entries score over 200 inches, so the 200 Club is a very small but elite group of bowhunters. Here’s one of those stories.

Marlon Hale glassed a buck in Carroll County, OH the summer before the 2005 deer season, but he wasn’t all that impressed. The animal was a long way off, and Marlon couldn’t tell how many points it had. He decided to look for something a little bigger.

For the next month and a half, he scouted but couldn’t find a bigger buck, so he decided to “settle” for the deer he’d spotted earlier in the summer.

Hale, who usually hunts with a compound, decided to try a crossbow just to see if he liked it. When the season opened, he hunted the deer for a month. He moved his climbing stand at least 10 times, trying to figure out where the buck was coming out of the woods and crossing into a cornfield, but he didn’t have any luck.

One morning on the drive to his stand he spotted a big deer. Marlon pulled out his binoculars and saw that it was the same buck he was after, only it was way bigger than he had thought and had a bunch of non-typical points.

Marlon worried that he might spook the giant if he tried to go in and hunt him, so he waited until the beast walked into 40-acre plot of standing corn, then he drove away.

Two weeks later Marlon returned to the spot before daylight. He sprayed down with a scent-killer and went for it. “It was a little windy that morning, and I worried that I was making a dumb move,” he says. “But I was tired of waiting, tired of moving my stand around. I decided I’d just take a folding chair with me and sit on the ground.”

Marlon set up in a small patch of woods beside the cornfield and waited…and waited… and waited. By 10 a.m. he hadn’t seen one deer. “I started thinking that setting up on the ground was a bad idea, but then I heard brush breaking behind me,” he says.

He turned and saw a doe. She stopped, panting, 16 yards from where he was lounging in the chair! She looked over her shoulder; Marlon heard three grunts.

Suddenly the massive buck stepped out. Shaking, Marlon reached for his crossbow, which was still leaning against his body. The buck quartered away and he pulled the trigger.

Marlon knew he had just shot a monster, but he wasn’t sure where he had hit him. He sat and chilled for 15 minutes to calm down. He found a little blood but he didn’t want to spook the deer, so he left the woods and went home for an agonizing 2½ hours.

He returned and in minutes found the monster 100 yards from his folding chair. His 100-grain, 4-blade Muzzy had hit behind the last rib on the right side and angled through the vitals perfectly.

“I couldn’t believe it, I had never seen that many points on a deer,” Marlon says. Twenty-nice to be exact. The rack grossed 262 inches and netted 247. Check out that fantastic mass! “I didn’t have anyone to help me drag him out, but I was so pumped that the 250-pound deer felt light as a feather,” Marlon says with a laugh.

That’s one of the best and nastiest crossbow bucks of all time.