We are editing the new season of BIG DEER TV, which will begin airing in July on Sportsman Channel. I was fascinated studying the interview and footage we shot with my friend Eddie Stevenson, who a few years ago shot one of the rarest whitetail deer in America. Here’s the story and some information: 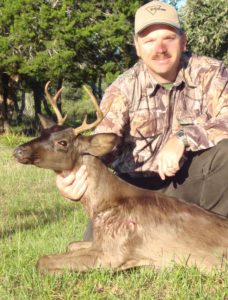 One day in the Texas Hill Country, a buck stepped out of the brush and Eddie Stevenson did a double take. It wasn’t the size of the rack, but the animal’s color—mahogany all over, with an even darker head and face. Eddie shot the buck, and the one-in-a-million mount now hangs on his wall.

“I know he’s a young buck, but this deer was on a small tract of land and I’m quite certain he would not have survived to maturity. Regardless of size, he is a trophy in my book,” says Eddie, who has hunted all over the world.

You have probably heard of albino deer and its kin the piebald (brown deer splotched with white, much like a pinto pony). Biologists seem to agree that less than 2% of all whitetails born will exhibit those white traits.

Black, or melanistic, deer are even less common, the rarest of the rare.  The first one recognized by a scientist was in 1929. Of the tens of millions of whitetails that have been shot by hunters in the modern era, only a handful of black deer have been documented.

Black deer have a genetic mutation that causes their bodies to produce too much of the pigment melanin, which gives the deer its dark coloration. A melanistic buck is not always solid black. There are gray to mahogany to walnut color phases, with some white on the belly and tail.

Unlike with piebald deer, which often have deformities like curved spines and partially stunted legs, none of the research conducted to date suggests that melanistic bucks have inferior bodies or antlers. They appear perfectly normal, save for their color.

The Edwards Plateau region of Texas is ground zero for melanistic deer. More black deer have been seen and harvested in the Hill Country than any other place in North America, specifically in these 8 counties: Hays, Travis, Comal, Williamson, Blanco, Guadalupe, Burnet and Caldwell. Researchers can’t say exactly why they are there.

The odd black deer has popped up in Pennsylvania, Oklahoma and a few other states in the last 20 years. The most recent sighting, a jet-black doe, was spotted and photographed last summer in Northern Michigan.

More information from the QDMA is here.