When Do Bucks Shed Velvet? 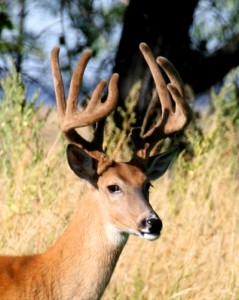 In most parts of the country, the antler growth for whitetail deer is done for the year. Sometime between September 1 and 15 bucks will shed their velvet.

The cue for antler hardening and velvet shedding is the change in photo-period caused by decreasing daylight and increasing darkness, which results in a significant increase in the bucks’ testosterone.

Velvet shedding typically takes only a couple of hours, though it is not uncommon to see a deer walking around for day or two with bloody velvet tatters. One last thing you might not know: Bucks have been known to turn their heads and peel or even eat velvet that dangles off their new racks.

Soon after shedding, the tree rubbing and antler-polishing begin. With their new crowns gleaming, mature bucks are ready and willing to breed the does for the next 3 months, until their testosterone begins to fade, old antlers fall off and the fascinating antler cycle begins all over again.