How To Rattle Bucks In December Post-Rut 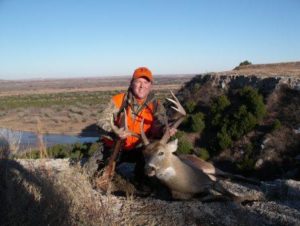 One cold, still morning in early December, we hiked down into a canyon near the Cimarron River in western Oklahoma and set up on a rocky outcropping. As pink dawn was breaking, my friend Kenny hissed, “Buck in the river.”

I peeked at the deer, an old fellow with a bull chest, thin hips and a gray face. I hadn’t looked at his rack yet but I knew he was a shooter, probably 5½ years old.

“Eight pointer, gnarly,” Kenny reported from behind his binoculars. “He’ll be on our side of the river in a few steps.”

The old warrior stepped out of the misty river and disappeared into thick brush. He popped out 250 yards away and I was fixing to try a poke…

I peeked over at Kenny, who worked his horns and grunter with a gleam in his eye.

The buck turned our way and marched in, back hair bristling and face a white halo in the morning sun. Two hundred yards, 150…

The 140-grain bullet drove him into the sandbar, and the buck never moved again. That’s him in the photo.

“The first weeks of the post-rut, when old bucks cruise for the last hot does, are a good time to keep rattling,” Mick says. This is the phase when the researchers rattled up the most mature bucks. Of the 29 bucks that responded to their 51 post-rut rattling sequences in the study, 10 were 5 ½ years plus, and another 10 were 3 ½ to 4 ½.

Here are a few things to keep in mind: