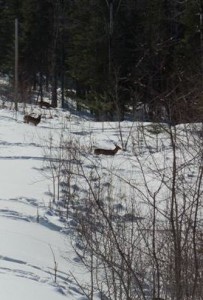 With temperatures at or below zero across much of the country, and snow and single digits as far south as San Antonio, I thought it a good time to reprint this post, which first appeared in January 2019:

How do whitetails survive intense cold and snow?

Chris Whittier, a researcher and professor at Tufts University, explains it well in this article:

…deer physically prepare for the winter by better insulating their bodies. In the fall, deer gradually trade their summer hair coat for a winter one, which consists of thicker, longer, and darker hairs called guard hairs, while also growing in a much thicker undercoat.

This winter coat absorbs more sunlight and traps more body heat than the summer coat, and provides an extraordinary amount of protection from the cold. Deer also have oil-producing glands in their skin that help make their hair water repellent, which is especially valuable in the snow. For further insulation, their bodies also begin to retain more fat in layers during the fall.

Chris points out that beginning in January, deer change their behavior:

They are generally less active, sometimes dropping their metabolism by half, which allows them to save energy and eat less. Deer may physically hunker down during particularly harsh weather—not moving for days, even to eat— which is made possible by relying on their fat stores.

Finally, in brutal conditions, deer in many areas gravitate to stands of thick spruce, pine and other conifer trees, which provide thermal cover from wind and snow. They may hunker down in there for days, rising only to nibble twigs, stems, grasses, and other plants that might be available.

That deer can survive the brutal winter of a place Saskatchewan (temperature -20 this morning in Green Lake where I hunt a lot) and grow huge racks the following summer amazes me.