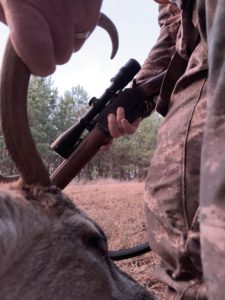 A Michigan hunter named Goose saw me shoot several bucks recently on TV with a Marlin Model 336 in .35 Rem. and he had to have one. He ordered his .35 lever more than a year ago, and has been waiting patiently for it since.

My buddy John Havlick, owner of Frank’s Gun Shop in Amsterdam, New York, texted, “Last year was absolutely crazy for us, and 2021 is starting the same way.” John says lever guns are still hot sellers with deer hunters up in the Adirondacks, but he hasn’t been able to get his hands on any Marlins for a long time.

That will change, but it’s going to take the better part of another year.

Killoy says that right now, Ruger is evaluating the equipment, looking at “every part for every Marlin rifle” and integrating everything into the Ruger manufacturing model.

Ruger plans to have new centerfire Marlin lever-actions on dealer’s shelves before the end of the 2021. Initial plans include building Marlin 1984, 1985 and 336 models, with the Model 50 .22 semi-auto coming later, presumably in 2022.

Caliber-wise, the good news is that Ruger is sure to carry on .30-30 and .45-70 in their new levers. I sure hope they continue to chamber the Model 336 in .35 Rem., a more obscure round but one of my favorites for whitetails at short range, for me that’s inside 130 yards.

The .35 Rem. is low recoil and hard-hitting, thumping down bucks on the spot if you put a 200-grain bullet in the right spot. I’m afraid that if the new Marlin drops the .35 from it’s Model 336 lineup, this great whitetail cartridge will be gone forever.