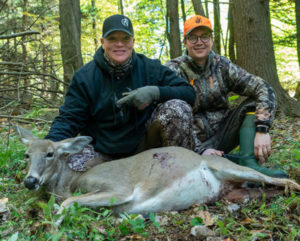 About 11 million people hunt deer in the U.S. Of those, a third are baby boomers born between 1946 and 1964. My generation is passionate and has hunted like no other.

But we are getting old and gray. Studies show that on average people quit hunting at age 65. Climbing a tree or wrestling a 200-pound deer out of the woods is not as easy as it used to be.

By 2030, it is estimated that more than 1 million Boomers will have hung up their guns and bows. Wildlife officials are worried about reduced money for conservation programs. Much of the outdoor has media predicted doom and gloom for the future of hunting.

In a turn that nobody could have predicted, people flocked to guns and the outdoors like never before. Some 8 million folks who had never shot a gun before bought one along with enough bullets to cause the ongoing ammo shortage.

In 2020, many states saw a 5% to 10% surge in hunting license sales. Some people who used to hunt but quit bought a permit and went again; it was called “reactivation.”

An estimated 1 million to 3 million people who had never hunted before hit the woods last fall, most of them looking to shoot a deer.

In the most exciting development I’ve seen in decades, we have started to build a new, younger and more diverse and dynamic hunting demographic across America. The challenge is to retain these reactivated hunters and newbies and keep them engaged in 2021 and for the long run, so they’ll help to fund wildlife departments and manage state deer herds.

Hank Forester, Director of Hunting Heritage for the National Deer Association, believes the effects of the pandemic will be long lasting on the human psyche, and that we’ve got a good shot at retaining many of the new hunters in the next decade.

“During the pandemic people saw empty shelves at the grocery store, especially on the meat isle, and the questions of self-reliance and issues with meat processing came to the forefront,” he says. “People won’t forget that.”

Forester also believes that the new and reactivated hunters truly enjoyed their time afield last fall. “All this aligns well with newer hunters who our data show to be focused on food and a connection with nature.”

With healthy venison and being outdoors as primary motivators of the new whitetail demographic, all bodes well for the next decade of deer hunting even as the Boomer retire.