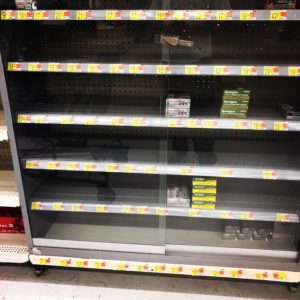 Southwick Associates, a market research firm specializing in the hunting and shooting business, recently surveyed more than 1,800 ammunition consumers as part of its quarterly Hunter/Shooter Survey. They found that in 2020, four out of five consumers encountered out of stock issues while trying to purchase ammunition. Three-quarters of those hunters/shooters have encountered out of stock ammo situations so far in 2021.

Of the respondents, 79% reported either fully or partially reducing their target shooting and hunting outings as a result of depleted ammunition shelves.

Going forward into 2021, ammunition demand is expected to remain high. Nearly two-thirds of respondents report their current ammo inventory was lower than they would prefer. When asked how much more ammunition they would like to have on hand, 43% reported “much more” while 38% reported “a little more.” Only 17% were satisfied with the amounts they currently had on hand.

When asked why they desire more ammunition, key reasons included:

“At some point, demand will certainly soften,” reports Rob Southwick, President of Southwick Associates. “However, frenzied purchasing and empty shelves often fuel further increases in demand. We do not see (ammo) demand softening in the near future.”

NOTE: I am proud to announce that Hornady has signed on as ammo partner for the new season of Big Deer TV airing on Sportsman Channel later this year. The good folks at Hornady want hunters and shooters to know that all the ammunition manufacturers are making and shipping more ammo than ever before. The “shortage” is solely the result of hyper demand.