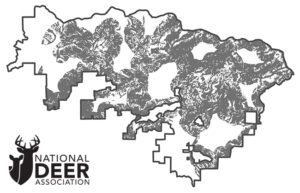 Two decades ago noted Missouri biologist Dr. Grant Woods used a mix of GPS technology, fancy software and old-school observation data (a ton of hours logged in a tree stand looking for deer) to produce maps of the hunting pressure on the properties he managed at the time. His spatial analysis inevitably showed that on all the lands, most people hunted close to fields, logging roads and similar access areas.

Face it, most deer hunters go the easy route and aren’t willing to work for it. Some are leery of getting lost and walking too far back in an area.

For example, on one large property Grant found that all the hunters spent 100 hours or more in “hot zones” of several hundred acres around fields and roads. The surrounding timber and thickets received only 10 to 20 hours of human pressure, and some spots weren’t hunted at all.

“Once we’re done with our analysis of a property like that, we’re never surprised to find that most of the oldest, biggest bucks are harvested each season in the lightly hunted spots,” says Grant.

247 yards: The average distance between hunters’ stands on Georgia public hunting land and the nearest road open to motor vehicles.

Jackie Rosenberger of the University of Georgia Deer Lab used GPS to track 58 volunteer hunters on two north Georgia WMAs to study hunting pressure and deer movements. She found 90% of hunting pressure occurred on only 51% of the WMA land, with low or no hunting pressure on most of the remaining lands.

The (accompanying) map is a graphic depiction of one of the WMAs in the study, with gray-colored areas within the WMA boundaries representing the area containing 90% of hunting pressure. White areas are hunted very lightly or not at all.

Decades of proof: To increase your odds of killing a big buck on public land, go the extra mile, work harder than others, and hunt in and around an empty white space on a similar map.