How Long Do Whitetail Deer Live In The Wild? 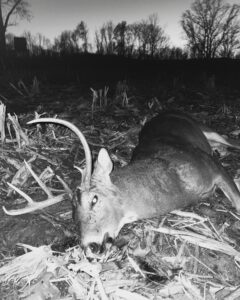 In the wild, a doe or buck that survives 4 or 5 years has lived a good, long life. Six or 7 years or more is ancient and rare for a wild deer.

So I found it fascinating to read a report from Pennsylvania a few years ago that confirmed 2 wild does, which had been captured, ear-tagged and released, had lived to at least 13!  One of those does was documented on a trail camera, and the other was shot by a hunter. That a deer could live 13 years in the wild with all the cars, coyotes and hunting pressure is yet another testament to how amazing whitetails are.

As for the pictures here, I shot this fully mature buck last week in Indiana. When I walked up to him and saw his thick neck, short face and thick, black hair cap on the front of his skull, I knew right away he was at least 5½ years old. The landowner, who has run trail cameras on the property for years, confirms the unique buck was at least 6 years old and maybe 7.

The “One-Bladed Bulldozer,” so named for obvious reasons, wouldn’t score much, but the 250-pound deer is one of the top bucks in my 40-year hunting career. Behind only a run- down, limping 8-year-old buck (the taxidermist sent off the jawbone and had it aged accurately), the Bulldozer is second oldest whitetail I’ve ever shot.