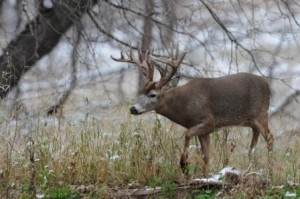 A few years ago my friend Don hunted “Old Double Drop” near a field of cut corn. It was bitter that December, the kind of cold that hurts, with afternoon highs in the teens and single digits. Don knew the whitetails had to feed a lot and early every day, so he kept sitting on the edge of the plot, figuring it was just a matter of time until the big deer showed up in last shooting light. He never did. Double Drop was smart.

So is Don. He knew of several narrow, south-facing CRP ditches in the general direction the buck was coming from. Early one afternoon he sneaked back into one of those ravines 200 yards off the feed and set up on the ground where the wind was right. At twilight he looked up and shuddered—Double Drop was walking straight to him! My friend’s muzzleloader belched smoke and his season was capped in spectacular fashion. The rack scored 150.

Don’t get caught up in hunting solely over a food source late in the season. A lot of old, wired bucks hang up back in the cover until dark, regardless of how cold, snowy and miserable it is, and how hungry they are. Sometimes you need to play the wind, sneak up a funnel close to a thermal cover where you think a big deer beds and set up in a makeshift ground blind. You can surprise a mega buck that way, or at least shoot a so-so buck to finish your season.