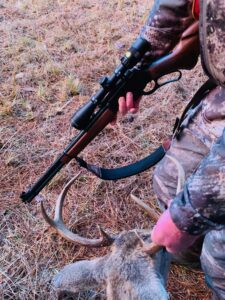 Introduced by Winchester Repeating Arms in 1895 as the main chambering for their Model 1894 rifle, the .30-30 was the first sporting cartridge loaded with smokeless powder. The original .30-30 Winchester load featured a 160-grain bullet driven at almost 2,000 feet per second, a huge step up in performance as compared to the black powder cartridges of the day.

It didn’t take long for hunters across America to fall in love with this revolutionary rifle/cartridge combo, which shot flat and hit and dropped game hard. The .30-30 quickly became the go-to for deer and bear at short to moderate range.

While a modern .30-30 rifle shoots a 150-grain bullet flat and accurately enough out to 150 yards, and imparts plenty of foot-pounds of energy to hammer a buck on the spot, it does so with negligible recoil. A Winchester 94 or Marlin 336 is short, lightweight, easy to carry and fast-handling. New levers are drilled and tapped for scope mounting. No wonder deer hunters, especially those who live east of the Mississippi, still love them.

Some 7-8 million Winchester Model 94s in .30-30 have been sold over the years, making it one of the most prolific firearms of all time. By 1983, during the heyday years of the Marlin 336, an estimated 3.5 million to 4 million of those .30-30 rifles had been produced and sold. Tack on tens of thousands more Model 336s sold during the last 40 years and the ongoing popularity of the rifle is evident.

Ammunition manufacturers report that .30-30 is still a big volume item. It consistently ranks in or near the top 10 in annual ammo sales due to the sheer number of lever-action rifles out there and still in use, killing thousands of deer each season.