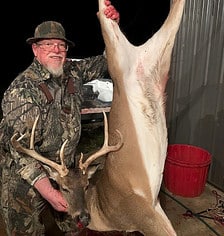 Last season, a group of hunters was celebrating the harvest of a nice 8-point in Sumter County, but they were in for a surprise when the deer was hoisted up on the skinning rack.

“Boys, this is a doe,” said the fellow that shot it.

The deer weighed a stout 175 pounds and had 8 scorable points on its rack, including two kickers on the base of one antler.

The lucky hunter said the deer was not chasing a doe but walking behind it. The doe urinated and this deer lip-curled just like a buck would.

“A deer like this with hardened antlers will have testes inside the body cavity,” Cook said. “They don’t have fully developed male or female organs. They may have external female organs, but they would have to have underdeveloped testes that were still large enough to produce enough testosterone to have that antler growth. While it may look like a doe on the outside, it’s not truly a doe. But it’s not a buck either. It’s very unusual for a functioning female to have antlers like that.”

Cook said the percentage of true does with antlers is only about 0.1% of the whitetail population. These does are fully functional females but have small, velvet-covered antlers, not fully developed, hardened antlers. He said does produce a small amount of testosterone from their ovaries but not enough to produce hardened antlers.

“I’ve seen a few over the years that looked like does externally that had antlers,” he said. “But it’s not physically possible to do that and be fully functional as does.

“I get reports about a few each year in Alabama. The ones I usually hear about (have) fully developed antlers still covered in velvet. They have enough testosterone to start the antler growth but not enough to complete the cycle.”