Are Elk Smarter Than Elk Hunters? 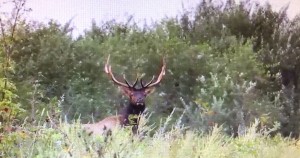 A recent study finds that elk herds know almost down to the day when hunting season opens, and where they need to go to hide out until the season is over.

The study, published in the Journal of Wildlife Management, tracked the movements and patterns of 445 elk that were captured along Utah’s Wasatch range and fitted with GPS-tracking collars. The collars provided researchers coordinate information every 13 hours during the study period between 2015 and 2017.

Major finding: Elk reduced their use of public lands by 30% in rifle season, moving quickly to nearby posted private lands where hunter pressure was  lighter, or non-existent.

“It’s crazy, on the opening day of the hunt, they move (off public land), and on the closing day they move back (to public). It’s almost like they’re thinking, ‘Oh, all these trucks are coming, it’s opening day, better move,'” said BYU professor Brock McMillan, the study’s senior author.

Click here to read more about this study, and how its findings could fit into elk management plans not only in Utah but across the West.