The Best Handguns For Deer Hunting 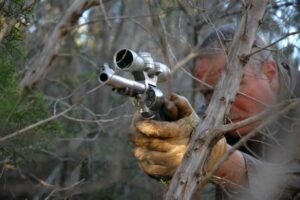 Having already shot his buck earlier in the season, my buddy Neil decided to try his hand at handgun hunting to fill a management doe tag. Here’s how the hunt went down, in Neil’s words:

I could only hunt for a few hours that Saturday because I had to baby sit later that day. I had to draw blood early or not at all, which seemed like a foolhardy and insurmountable feat since I had never hunted with a pistol before, much yet killed anything with it.

Half-hour after first light 2 does came in, broadside at about 40 yards. I raised my .41 Magnum and fired at the bigger of the two deer, the lead doe. Boom! She didn’t move an inch. Then she bolted 5 yards and stopped. Boom! I rushed it and pulled both those shots.

The doe stopped broadside at 45 yards. I took a deep breath, got a firm two-hand grip, regained my composure and really squeezed the trigger this time. She just stood there, didn’t flinch! But this time the doe didn’t know she was hit. In a few seconds, she fell down and shook a time or two and that was that.

Now, with an anxious wife waiting at home for me to take over with the kids, I had my work cut out. I got down from the tree stand, walked to the doe, dragged her 200 yards, wrestled her atop my ATV and roared back to camp to our designated gutting area. I cleaned the deer, cut out the tenderloins, hung the carcass in the cooler box, hit the road and arrived home at 11:15  with a full 15 minutes to spare.

That was a sweet rig I used to kill my first revolver deer. Smith and Wesson Model 657 in .41 Magnum topped with a 2.5X-8X EER scope (extended eye relief), shooting a 175-grain bullet. –Neil