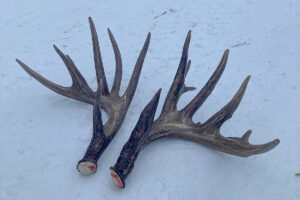 From our friends at North American Whitetail:

“I was driving down a road that I know has a lot of deer activity along it,” says Ryan Reddekopp. “The road ran between two community pastures, so I could pick up any sheds that I saw lying along the road.”

There was a heavily used deer trail along the road, so Ryan kept his eyes on the trail and a ditch along the road the best he could. Then something caught his eye where the deer trail crossed the fence.

“Something just didn’t look right,” remembers Ryan. “I originally second-guessed it, but about 100 yards after passing the spot I backed up. Sure enough, I saw a shed sticking out of the snow.”

The amazing 94-inch shed had blood on the white base, telling Ryan it had just recently been dropped. He looked around and found the matching left side about 40 yards away. This will likely be the largest set of matching shed antlers found anywhere this spring.