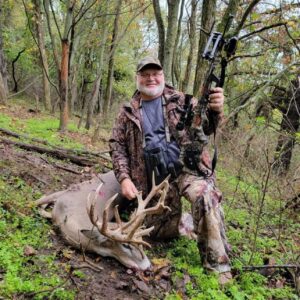 Hanback note: Since some 900,000 people hunt deer in Pennsylvania each year (number of hunters is second only to Texas in the U.S.) the annual Pennsylvania harvest numbers are a big deal.

• 22 percent of licensed hunters in Pennsylvania killed a buck last year.
• 62 percent of the bucks were 2.5 years old or older; only 38% percent were 1.5 years old. That’s an almost complete reversal of how things were two decades ago. Game Commission Executive Director Bryan Burhans credited the older buck harvest to how hunters have embraced antler restrictions, which have been in place since 2002.
• 25% of hunters with an antlerless tag filled it. Among the antlerless harvest, 69 percent were adult females, 16% were button bucks and 15% were doe fawns.
• Bowhunters (both vertical and crossbow) shot 130,650 deer, a little over one-third of the total harvest (68,580 bucks and 62,070 antlerless).
• The estimated muzzleloader harvest was 21,060 (1,020 bucks and 20,040 antlerless.
• Per usual, gun hunters killed the most deer, tagging 225,100 animals.

In the photo: Our friend Terry “Big Daddy” Murphy with a great Pennsylvania buck he killed last October.