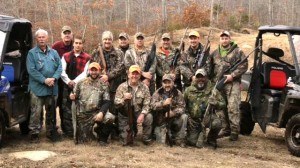 On this Earth Day I refer you to a passage written a few years ago by two of America’s top deer biologists, Drs. Larry Marchinton and Karl Miller:

In the United States roughly 3 million white-tailed deer are harvested each year… This translates to about 150 million pounds of meat. Add to this the amount of elk, turkey, squirrel, rabbit and other game as well as wild fruits, nuts, and vegetables that is consumed. To produce this amount of beef, chicken, or vegetable crops in addition to that which is already produced would be ecologically devastating. Acres and acres of wild places would have to be destroyed to accommodate this increased agricultural production. More wildlife habitat would have to be plowed under. More pesticides would be applied. More soil erosion would occur. More waterways would become lifeless drainage ditches. Isn’t it better that some of us reap a sustained harvest from natural systems, rather than destroy these systems?
Some Hunter Facts from the NSSF:

• Sportsmen contribute nearly $9.4 million every day, adding more than $3.4 billion every year for conservation.
• Hunters and target shooters have paid $11 billion in excise taxes since the inception of the Pittman-Robertson Act in 1937.
• Hunting in America is big business, generating 680,000 jobs in the United States.
• For more than 80 years, sportsmen have paid more than $20 billion for on-the-ground (habitat) projects in every state, protecting our natural environment and our fish and wildlife.

Today let’s celebrate that we are North America’s top conservationists and environmentalists!