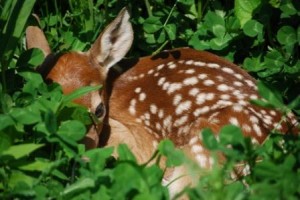 Most every scientific study conducted over the past 30 years has documented predation, largely by coyotes, as the leading cause of whitetail fawn mortality. This time of year, on websites and social media, you see unsettling images of coyotes prancing by trail cameras with spotted fawns dangling out their jaws. Outdoor television has aired countless shows focused on killing coyotes to save deer. I once filmed an episode of Big Deer TV on predators, the theme of which was to thin coyotes on your land to save a few fawns and help your deer herd.

We’ve been conditioned to hate on the coyote. But wait a sec…

“Predation may have less of an impact than we think,” writes Justin Dion in this article posted to the National Deer Association’s website.

In the springs of 2016 and 2017, Dion and his fellow researchers at the University of Delaware captured and collared 109 newborn fawns in Sussex County in the southern portion of the state. The study area had about 50 deer per square mile, but a noticeable lack of predators. No confirmed sightings of bobcats and no bears. Only 9 coyotes had ever been reported harvested statewide in Delaware at the time of the project.

Each of the 109 collared fawns was monitored daily. When a fawn died, the researchers investigated the scene, collected data and sent the carcass to a veterinarian for necropsy.

After crunching the numbers, Dion and crew reported that only 49 of the 109 fawns they tracked were still alive 90 days after their birth. The 45% fawn survival rate in the Delaware study was very similar to studies over the past 20 years, all of which listed predation, mostly by coyotes, as the leading cause of fawn mortality.

“What we found was somewhat surprising,” points out Dion. “Even in the absence of predators, many fawns were still dying. All the fawn deaths in the study were linked to natural causes like emaciation, disease and birth defects.

Four noteworthy findings from the study: 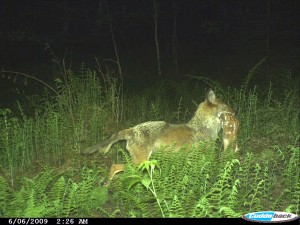 As this new research shows, while many fawns succumb to natural causes, there is no question that predators kill and eat a bunch of baby deer in most areas. It never hurts to shoot a coyote or 2 or 5 when and where legal. You’ll have fun and save a few of the healthy little deer.