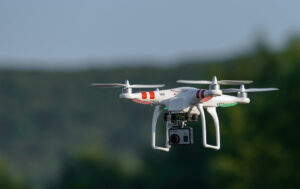 In a recent Southeast Deer Study Group (SEDSG) meeting, wildlife specialist Jesse Exum presented a paper on estimating deer numbers with the use of drones. Drones were fitted with thermal-optical video cameras and flown at 5 different sites in South Texas. Result: The drone-captured thermal estimates of deer from the 5 surveys were comparable to much louder, time-consuming and expensive helicopter survey estimates.

In another study conducted while doing his postdoctoral work, wildlife specialist Jared Beaver and colleagues equipped drones with thermal cameras and flew them over a 430-acre facility at Auburn University in Alabama, where the precise number of whitetails in the enclosure was known.

After analyzing the results of their evening flights, the researchers found that the population counts from their drones were 90% to 92% accurate with the known numbers of deer in the facility.

Drone technology will only continue to improve, and soon I can see most wildlife agencies using drones to monitor deer herds, especially in relatively open, flat habitats. Additionally, scientists say that drones could be used to assess and study populations of wild hogs, and to monitor large predators like bears to help focus resources and provide needed support to landowners in an effort to minimize potential conflicts with both humans and livestock.

While the use of drones is rightly forbidden for scouting and hunting deer, no question the little birds are here to stay for surveying and estimating deer and wildlife populations.