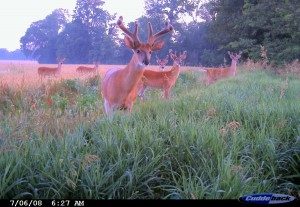 Buck Group Size: Two to 4 to 8 bucks hanging out together is typical in mid-August, but I have seen as many as 10 velvet-racked bucks in a late-summer group.

Knowing how much I love to watch and study bachelor clubs, hunters from all over have emailed me with reports and pictures of 12 to 15 or more bucks feeding and posturing together in a field. Last year, a guy from Maryland reported seeing 30 different bucks in a soybean field most every night!

Truth is, these mega-groups are rare. Big numbers of bucks are actually 2, 3 or more different bachelor groups that happen to come together and loosely comingle.

Summer groups are comprised of bucks of all ages, from mature 10-points to 6-points to yearlings. Biologists say the deer in each gang are usually not related.

Why Bucks Group Together: Matt Ross, a biologist who works for the National Deer Association, says that by forming summer groups, bucks may show strength in numbers. “It may aid in predator avoidance at a time when bucks are relatively defenseless, when antlers are growing and vulnerable to damage,” he says.

Bachelor groups may allow bucks to establish a basic dominance hierarchy through mild forms of aggression, which may reduce the amount of serious fighting necessary later in fall as the rut approaches.

While bucks generally get along well throughout July and into August, they establish a pecking order and use posturing, semi-aggressive vocalizations and sometimes hoof-flailing to show who’s who in the pecking order.

Buck Group Breakup: In mid- to late August, as the days begin to shorten, testosterone levels begin to rise in the bucks, triggering the hardening of antlers and the eventual breakup of the groups, though some smaller bucks may tag along with mature ones into October.

Aggression within the group rises, and bucks begin to spar using their new antlers. This initial sparring is usually not serious and often involves bucks of widely differing age and size rubbing and clicking their hardening racks.

Scientific dispersal studies have shown that from late August to mid-September, after velvet shedding, some of the bucks within a group might move a mile or more to fall and winter range, but other bucks will hang tight in the core areas where they live year-round. You should be able to hunt at least one mature deer and likely more right there in the same fields, edges and strips where you’ve watched them this summer.