How And Where To Kill a Good Buck Halloween Week 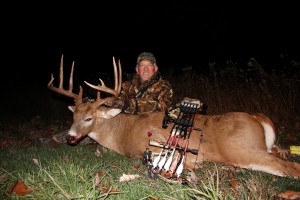 n my 2022 moon-rut predictions that I posted to for Outdoor Life, I spoke about a study conducted at North Carolina State that I rely on when planning my hunts across North America each season. In that project, researchers attached GPS collars to does and bucks and tracked their movements throughout the 4 major moon phases.

Their data showed that during a new moon, which this rut cycle rises on October 25 and wanes on the dark side through Halloween (zero to 47% daily illumination) deer move most actively at daylight, with movement decreasing noticeably the rest of the day.

Halloween week, when bucks scrape like fiends and prowl for does not quite ready to breed, is one of my favorite times to bowhunt. Some advice:

Best conditions: Compared to the last several years, we’re having noticeably cooler and frostier weather for October across whitetail nation, and let’s hope the trend holds. A cold front followed by a few days of high-pressure with a light northwest wind and temperatures in the 35- to 55-degree range… If things come together on Halloween, you’ll see deer moving and starting to rut.

With the new moon still on the dark side (47% illumination) I think you’ll see the most does, and maybe a buck pushing a doe, from sunrise until 9:30 a.m. or so. Get settled on stand early and watch hard those first hours.

Where to hang a tree stand: A killer spot is near the corner of a woodlot where an overgrown pasture and a crop field merge. Bucks will run those diverse edges and fence rows, rubbing and scraping as they make for the feed in the afternoon. Some does and bucks will cut across the weed pasture, especially in the mornings, so watch for tines and flashes of hide out in the brush. Shoot straight and good luck.