Whitetail Buck “Excursions” In The Rut 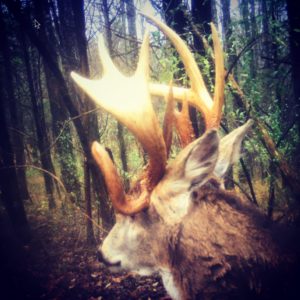 One thing researchers have deciphered in recent years using GPS technology is a somewhat new behavior that white-tailed deer do called an excursion, which is a brief trip or trips outside their established home range.

This behavior especially occurs during the rut, and I have a personal story from the 2018 season to prove it.

We have been running 2 dozen trail cameras for a decade on a 1,000-acre farm in the Virginia Piedmont where I hunt. Imagine our shock and excitement when we checked a card and saw one image of this awesome buck from November 18, obviously an older deer with a ton of character.

We had never seen this non-typical buck before, no images of him earlier in the 2018 season, or in previous years. We moved into the area and hunted him for the next 3 weeks. Never saw the buck, and never got another picture of him.

Until early December, when the photo below popped up on my phone. The lucky hunter shot the buck about 2 miles away from where we got that single image of him.

My theory, and it’s solid, is that on November 18 last year, the buck went on a “rut excursion,” traveling 2 miles or more in search of does, and that is when he just happened to walk by one of our cameras. Then I believe he went 2 miles home to his established home range/core area, and that’s where the hunter got him.

In the NDA article mentioned earlier biologist Matt Ross goes on to say:

When analyzing the available data from six studies performed in six different states on 182 collared bucks from 2011 to 2014, it appears roughly half of the study animals had the tendency to go on an excursion at some point in their lives… In fall, when bucks are engaged in breeding behaviors and when you’re likely out spending the most time hunting, the average was closer to 60% of individuals that went on an excursion.

How far did they go, you ask? Of those 182 collared bucks, the average distance traveled was roughly 1.5 miles away from their home range. However, there was a lot of variability in that data and ranged from a quarter of a mile to 8 miles away.

Here’s what it means if you’re hunting this week, or anytime in the rut.

First, if a good buck you’ve seen several times, either on the hoof or on camera, suddenly disappears for a while, there’s a good chance he’s gone on excursion for does. Hang tight on stand. If a hunter a mile or two away does not shoot him, the buck will be back. Might be back the next day, or 2 weeks later. You might get him yet later in November or December.

Second. this is another reason that during the rut, you should hang tough on stand as long as you can, all day every day if you can hack it. There is always a chance that a 140- to 160-class buck that you have never seen before will come from 2 miles away on a doe excursion and walk smack in front of your stand. Smile, stay steady and take him!