The reclusive and nocturnal nature of whitetail bucks is as prevalent in October as in any other month, maybe more so. Plus, old deer are summer-fat and wear heavy fur coats; no wonder they move so little and waddle so slowly on Indian summer days. You can sit back and wait for the stars, moon and a cold front to align to put the bucks on their hooves in daylight hours. Or you can have more fun by trying some tricks or even a spectacular ruse.

1) Before old bucks start putting on their game faces for the rut on toward Halloween, they’re fat and happy. Crops, clover, green browse, acorns and other mast are everywhere. Bachelor groups and loner males bed 50 to 150 yards from the feed and waddle over there to pig out. So which food source to hunt? None of them!

Sometimes I like to sneak off and hunt a cut hayfield or an out-of-the-way pasture or gas line, especially for a few days after a rain. Hundreds of varieties of weeds and broad-leafed forbs pop up amid the native grasses. Herbivores like deer love the tiny, tender plants, which give a twist to their diet. I’ve watched small groups of deer and singles walk past soybeans, clover or corn to nibble greens in a pasture. When they do that, be there.

I generally don’t hassle with hanging a tree stand because forbs come and go, and deer movement to and from them is iffy. Once I glass a few deer heading to a pasture or power line, I sneak over there and set up in a ground blind. Most days I don’t get a bowshot, but sometimes I hit it big anyhow. On several occasions I’ve found a shooter 8- or 10-point that I didn’t know was in the world because he hadn’t hung out with all the other deer in crop fields and plots that fall. Another thing I like: Nobody else hunts a food source like this. While all the other archers are packed around the acorns and alfalfa (pressuring the bucks and turning them even more nocturnal) sometimes I hit the jackpot in my forbs spot.

2) Legendary Iowa recurve shooter Gene Wensel stinks up the joint–on purpose. One time he had a bunch of deer hanging in fields and pastures 150 to 250 yards from his stands. It was in the 70s that week and the animals weren’t moving much. Gene went to the local barber shop and beauty salon, collected bags of hair clippings and spread them in the fields one night. “The next day all the bucks had moved over into the woods with me,” he says. “I didn’t shoot one, but at least I was closer.” Gene continues to use the old-school tactic of hanging 8 to 10 dirty socks strategically on bushes, limbs and fence posts to trick and funnel deer toward his stands.

3) Barry Wensel, Gene’s twin brother, injured his arm a few years ago, and now he hunts out of ladder stands that he can climb with one hand. He camos those huge platforms with artificial leaves and ferns that he buys at a craft store. “You know, the brown, gold and green plastic or nylon ones with the wire stems,” he says. Barry weaves the fake foliage around the uprights of the ladder and threads it down, around and through the seat and foot grill. When the real leaves fall later on in October, his ladders stay hidden and deer are used to seeing them.

4) Most people hunt around food sources on October evenings. Not Ralph Reynolds. The former Mr. Missouri bodybuilding champ is a morning person. “I’ve seen big deer do goofy things, like get up and mill around from 8:00 to 10:00 a.m., even on the warmest days,” he says.

Once during the early black-powder season in Kansas, Reynolds shot a 156-inch buck that wandered through a piece of public timber at 8:30 a.m. That was a primer. The next season he smoked a 17-pointer that grossed 202 inches!
Reynolds isn’t a sitter. He sneaks to cover downwind of a crop field, still-hunts along at a creep and glasses brushy draws and strips of timber. “Bucks haven’t been hunted for a year and they’re vulnerable,” he says. “You have to be smart and go slow, but some mornings you can stalk within muzzleloader or even bow range.”

5) Tom Fassbinder of Guttenberg, Iowa scouts for oaks with big crops of nuts; he hangs stands nearby where the wind will be in his favor in October. When he comes back and climbs into those stands, he pulls gravels from his pocket and drops them plop, plop, plop every few minutes. “You can flick them in different directions for added effect,” he says. The little stones sound like acorns falling into the leaves, a sound that can attract deer. Tom notes you can wear latex gloves to keep your scent off the stones.

6) Ever noticed how slowly bucks meander through the woods the second week of October, stopping here and there to smell and/or lick limbs, leaves and brush? Their olfactory senses are working overtime now, and I play off that with a foam doe scent. I don’t waste time and hassle with liquids, wicks or boot pads. I carry a can as I sneak to my stand and spray dabs on limbs, leaves and logs. Even if a buck doesn’t follow my scent trail all the way in, at least the doe pee helps to cover my odor. I spray globs the size of a softball in shooting holes near my stands. I climb up, zap the white globs with my range-finder and know which sight pin to use if and when a deer walks by later.

7) In Iowa one day last fall, Brian LaRue looked up and saw a monster coming. Sixty yards out the 22-pointer stopped and mauled a sapling, then looked toward Brian’s tree and lugged on in. The hunter drilled him with an arrow. The 222-inch non-typical was one of the top bow bucks of 2005. “I’m convinced he was going for another big rub he saw on the other side of my stand,” Brian says.

That got a buddy and me to scheming: Let’s fake something like that and see what happens. Next week Luke Strommen will pull up a couple of cedar posts that bucks have rubbed for decades on his Montana ranch (some deer will already have rubbed the posts again this fall and permeated the wood with more fore-head scent). He’ll truck them down to an alfalfa field by the Milk River, and sink them on an edge where 40 or more deer coming and going to the feed each day can easily spot them. Luke will consider the wind and set the posts within 25 yards of two of his best stands where he has shot some 8- and 10-pointers in the past.

Soon I’ll head out to bowhunt those stands with Luke. I’ll let you know if we get lucky, and we just might. Bucks not only love to blaze rubs, they also like to veer over to smell and /or lick signposts that other males make. We’ll be watching and waiting.

8) Here’s another act of thievery that won’t get you in trouble. When the first serious scrapes start popping up in the woods around October 20, clip two or three mangled “lick branches” from over the scrapes; carry them a half-mile or so to your stand; and wire the limbs four or five feet above a set of fake scrapes you paw just upwind of your perch. Longtime whitetail researcher Leonard Lee Rue writes about the ruse in his book Way of the Whitetail (Voyageur Press, 2000): “The key seems to be that the overhead branch needs to be chewed upon, which leads me to believe that the saliva (of a deer) is more important than the forehead scent (for attracting bucks).” Play like a real criminal and wear latex gloves when you lift and relocate the limbs and doctor the dirt below with buck urine.

9) Iowa hunter and TV star Terry Drury finds irony in the October whitetails he hunts in the Midwest. They haven’t been pressured for a year, but they’re still super-sensitive to odors and noises. “If you get sloppy and spook one doe, she’ll bolt and then all the other does and bucks in the timber will run,” he says. “You can contaminate a great spot for days or weeks and ruin it for the rut.”

On every hunt Drury clicks his truck doors shut ever so lightly. He doesn’t rattle or even clink a chain on a metal gate. Takes an extra minute to hop a fence right. “When deer hit a barbed-wire fence it twangs,” he notes. “When you push it down to cross it, it squeaks.” On the way to his stand, he grinds his boots in deer pellets or dry cow pies (but not in the yucky green ones). He rinses his boots thoroughly in creeks when he can. “We wear rubber boots, but every little bit helps,” he says.

• Spot an 8-point hog the first weeks of October and you know he has set up his fall core area in your woods. He’ll likely hang out within 400 acres or less until he begins to expand his range and hunt for does around Halloween.

• Say it’s a humid 70 one evening and you’re watching a trail near a field. Stand up in your tree stand and nock an arrow those last 15 minutes of shooting light. A buck or a bachelor’s group that didn’t move all day might jog past you toward the feed. Listen for them churning back in the woods, and be ready for a quick shot.

• The best two days to hunt are after a cold front blows through and drops the temperature 20 or 30 degrees. The blast kick-starts bucks to feed and sniff does. Be out there.

• Say you sit in a stand and can see three or four different trails that dump into an alfalfa or clover field. On the trail where the first does show up is where you’ll see 80 percent of the deer that evening.

• I don’t rattle until Halloween (my field research shows that too much racket too early spooks more bucks than it brings in). But I grunt sharply at every buck to coax or turn him into bow range.

• On ridges and flats where you found the most acorns in late September and early October is where you’ll find the first and most scrapes around the 20th. 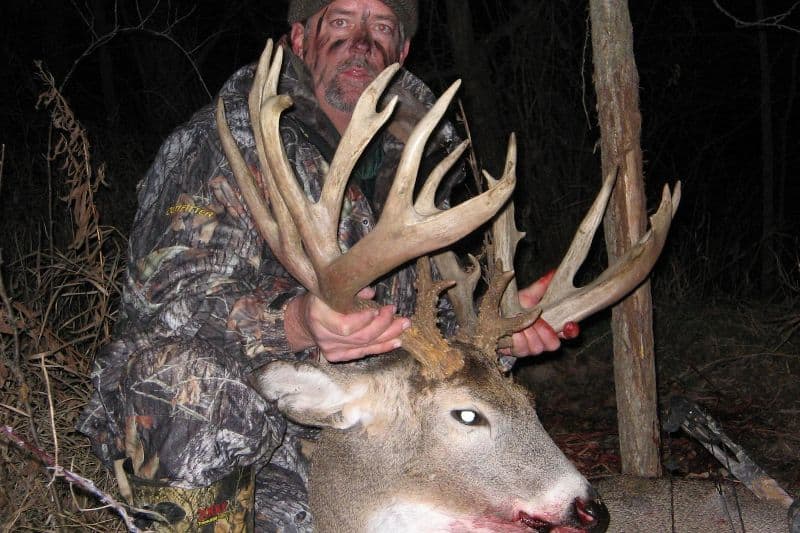