For two years there was talk of a mysterious buck with massive drop tines roaming the part of Missouri where Kevin Jaegers’ father-in-law owns a farm. When trail-cam images of the 200-class freak started popping up—finally some hard evidence–Kevin got serious. He hung a tree stand on the farm last summer and vowed to hunt the monster hard in September.

This was a departure for Kevin, who normally doesn’t hunt that much in the early bow season. But he figured that if he was ever going to see Drops, the first days would be the best. After that, pressure in the area would likely turn the buck nocturnal.

Opening day came, and the wind was wrong for Kevin’s stand. “I tried to talk myself out of going that evening because the wind was blowing where I thought deer would bed and travel,” he said. But Kevin knew “the” buck was out there somewhere, and so he went.

With the leaves green and thick on the trees, Kevin couldn’t see far. He spotted a few does and then a small 8-pointer. “I looked behind him and there he was, I saw those drop tines!” said Kevin. Funny, he wasn’t that nervous. “Probably because I didn’t know he was there until he was 30 yards away. I didn’t time to think.”

When Double Drops walked behind a tree, Kevin drew his bow and fired. The cam images didn’t lie. The rack grossed 201 and netted 194 5/8, making it the top buck of early archery season 2011 and one of the coolest bucks killed all year. “I can’t believe I was in the right place at the right time on opening day,” Kevin said.

Well, believe it. The first days of your bow season in September or early October are second only to the rut for best time to kill big deer. The bucks have not been pressured for a year; they’re using small home ranges; and they’re walking predictable bed-to-feed patterns. You might not whack a 190-class titan like Kevin did, but a gnarly 8- or 10-pointer might be in your future if bowhunt hard and smart in a few weeks.

Hang at least one tree stand on the edge of alfalfa, corn or beans where you’ve been seeing some bucks come to pig out the past few weeks. You have been scouting and glassing right? If not, get out there. You’ve still got time.

Watch a field from several hundred yards away for several evenings in a row. If you see a shooter pop out the same spot–for example, through the same corner or beside a round hay bale or big tree–move in one day at mid-morning and set a stand right there on the edge by your landmark. Forget what you might have read about big deer not making it to the feed before dark. Right now, the animals have not been pressured, and they are fairly lackadaisical on their patterns. A 140-class shooter or even a giant might stroll out into the field feed in the last minutes of light.

Pick an afternoon to hunt when the wind is not blowing anywhere toward your landmark and into the woods behind it. Sneak into your stand three hours before dark, climb up quietly and wait patiently for the action to begin, likely in the last half-hour.

Working water into your early-season routine is smart any year. A river or creek, or pond or swamp that isn’t too stagnant is best. Sneak to a water hole from downwind and set up quietly, because some deer are sure to bedded close in the cover. During a hot spell you might score from a water stand morning or afternoon.

You can never go wrong by setting a bow stand near acorns that fall 100 yards or so off a field, food plot or water source. Some does and bucks will stop to stage and gnaw the nuts before heading out to a field later in the afternoon. Try to find white or read oaks that are just beginning to rain their nuts, and set a stand that is easy to access on the downwind side of where you expect deer to appear.

Every time John Schmucker spotted the 36-point giant in the summer of 2006, he was traveling with three smaller bucks. When Schmucker went out hunting with his crossbow on September 30 that year, the first deer he spotted was one of those little guys. He knew the monster was close so he got ready. A few minutes later there he was! John’s bolt was spot-on. The Schmucker buck, with a non-typical net of 291 2/8, is the largest buck ever shot with a crossbow in Ohio.

John killed one of the nation’s all-time monsters largely by thinking and being smart. He remembered the makeup of that summer bachelor group and used that knowledge to his advantage. The lesson: As you glass and/or study trail-camera images of a buck group in late summer, study the makeup of it because most of those deer will run together into October. If spot one of the bucks comes close, the others are close, too. 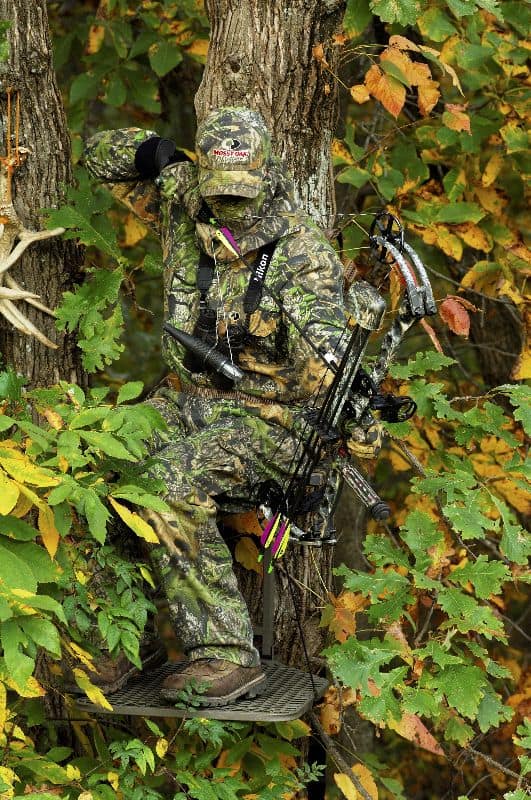