Mike: Wondering if you could settle a friendly argument. A buddy and I were discussing deer jumping the string. I say it is all noise related and they instinctively react; he says it could also be visual—they see the arrow coming. Wondering your thoughts? Also, do you ever see a bow being fast enough that you don’t have to worry about them jumping the string or is that impossible? Thanks and keep up the great work! Jake in WI

You win, it’s an instinctive reaction. I heard a guy say one time, “It’s like when somebody sets off a firecracker, you jump.” Good way of illustrating it. I’ve heard people say that some deer might see the arrow and move, but I don’t buy it.

Jumping the string is actually a misnomer. It should be called “duck and roll.” A doe or buck hears your bow go off, drops its chest down and whirls to run in one motion. Can’t see it with the eye, but watch a slo-mo video and it’s amazing!
Some (most) whitetails drop at the bow sound, others don’t. The unpredictability has to do with the distance to deer, quietness of bow, foliage that does/does not muffle sound, etc.

You never know, so hold the correct sight pin on bottom third of a buck’s vitals. Deer drops, you pierce mid-lungs; deer does not drop, you lance heart/low lungs. Either way, you kill deer.

I think deer duck and roll more in the East and South than in the Midwest or West, though they do it everywhere, and it’s unpredictable.

I understand the speed of sound is 1,126 fps while a fast compound shoots an arrow at 320-plus fps. So I am reasonably sure there will never be a bow that propels an arrow that at least some deer will not jump (or rather duck :) 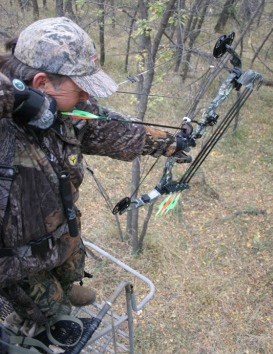