I have hunted with many guides over the years, none more skilled and meticulous than Terry Scott, who outfits for huge mule deer in the Red Deer Valley of Alberta. Terry’s specialty is getting bowhunters within 60 yards of giant bucks in farm country that is flat as a pool table in many places. The man is good at what he does. Every September his hunters kill bucks in the 170- to 190-class—on the ground, spot and stalk, with a bow. Here’s how he does it.

At sunup in September and early October, Terry glasses bucks as they move off feed fields and work toward bedding areas. He watched them for 30 minutes or 3 hours—however long it takes for the deer to bed down on a grassy hillside or in a copse of trees. “Sometimes a buck group will stop for a while, but get back up and move to another bed where the visibility and wind are better for them,” he says. “They might do this 2 or 3 times in a morning. Keep glassing until they bed where they’ll stay put for several hours or all afternoon.”

But it’s not time quite to charge off yet on a stalk. Pick apart the terrain and cover between you and the bucks with binoculars and spotting scope. Look for does and small bucks—Terry calls them “spoilers”—that might see or smell you and blow up your stalk. Plan a circuitous route that will take you around any spoilers, and watch your target buck(s) as much as you can. If the big bucks move, you can adjust on the fly. Or if a doe walks into your line, you can stop, back out and circle. “It’s all about staying sharp, seeing as much country as you can and controlling the situation,” says Terry.

The early-morning wind in open country is finicky. As Terry glasses bucks and plans a stalk for an hour or more, there is more to his madness. He lets the sun rise and the wind settle, until it blows mostly in one direction. “I rarely take off until the wind gets steady, that’s the only way you can reliably stay downwind of a big buck and any spoilers out there,” he says.

But Wind is Good

A steady midday wind is good because it sways and bends standing wheat, alfalfa or grass and covers your moves. Terry wears a brown-and-green Ghillie Suit that blends perfectly with the early-fall cover; the fabric strips move against the grass and in the breeze for maximum concealment.

Take off and go, quickly at first. Use draws and the backs of hills for cover, but remember, sneak where you can peek at the bucks and see what’s going on.

When you’re bowhunting, the last 200 yards are the toughest on the plains. The first time you stalk a bachelor group of 5 or 6 bucks with Terry you’ll swear there is no way to get within 100 yards of the deer. But you probably will.

“Look for the lowest depression along your stalk route—a swale that might be only a foot deep—and get in it,” says Terry. That foot and the two feet of swaying grass or crop above it give you more than enough cover to move in tight.

Lie flat on your belly in a low spot, and rest your bow on your back (no arrow nocked yet). Put all your weight on your elbows, and pull your body forward. Inchworm to a bush or hill lip until you feel close. Stop, ready an arrow, rise up slowly on your knees in the grass and zap a buck with your range-finger. If a buck is within 60 yards and especially 50, take that shot so long as you have practiced at those distances and are confident. Terry can get you close, but only so close. “Long-range shots are the norm when you stalk the giants up here,” he says. 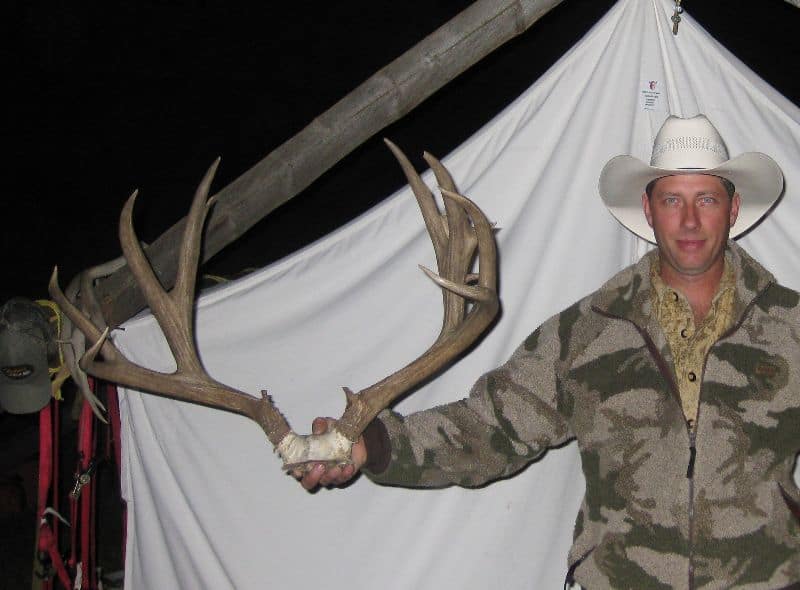