Decoys work–sometimes. I’ve never had a buck roll in to mount or fight my fake like some hunters have, but I’ve had more than a few sneak in and check it out.

Decoys don’t work–sometimes. I’ve watched both does and bucks of all ages shy from the fake bait from afar; others crept closer, only to hang up just out of bow range.

Decoys are fun to use anytime! A fake doe or buck adds excitement to any hunt. You sit in your lock-on and wonder, “How cool if an 8-pointer comes to this thing and I kill him with my bow?” Here are some ways to maybe make that happen.

Develop a routine for packing in with a decoy. I like to stop 70 or 80 yards downwind of my tree stand, assemble the decoy (or inflate it) and sneak the rest of the way. I go slowly to deaden the noise of scraping of limbs and brush on plastic.

I stake out the decoy and climb the tree, fast. This is about as efficient as it gets with a full-body unit. Plus, you don’t leave a ton of stink on the ground where you hope a buck will come in for a shot, like you would if you knelt and assembled the decoy parts on the spot, the way most people do it.

Wear rubber gloves and use a scent eliminator when packing and fitting it together. I spray mine with Scent Killer.

A decoy can’t work if a buck can’t see it and come to it. Set your fake on the edge of a field, in a woods glade, on a grassy hillside, on a sandy river bank…you get the picture. A spot with a mix of openings for visibility and patches of thin cover that a buck can work through is great.

Do not set a decoy in thick cover where it will surprise a deer that happens by. I’ve seen both does and bucks freak, flip end over end, and run from an imposter that suddenly popped up in the brush.

Buck decoys are the rage today, but I think a good-old doe works better, definitely early and late in bow season. Set Ms. Plastic in a bow-shooting lane 15 to 20 yards in front of your tree stand and on the upwind side of it. Face her into the wind—a buck will always come from downwind to sniff her butt. Hang two wicks with doe urine nearby to reel him those last yards. Do a little soft grunting or bleating like she might if she were real.

In most parts of whitetail nation, October 20 to November 8 or so is the time to try a trick buck. Again, set it where deer can see it, and close to a spot with some big, hot scrapes and fresh rubs. Stick one or two antler twigs on its head; hang some stout buck urine or tarsal nearby. Do some rattling and aggressive grunting every 20 to 30 minutes. With the real bucks agitated and prowling, a 10-pointer might hear your ruckus, spot your imposter and roll in to kick his butt. Keep it together and shoot straight. 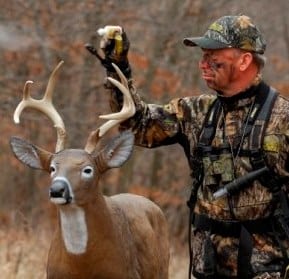