You just shot a decent buck, don’t feel like shelling out $500 or more for a shoulder mount. Well, do the next best thing and do a European (5 easy steps below). It’s cheap and you’re really not settling. Skulls-and-racks are “in” as home decor; heck, they sell for hundreds or even thousands of dollars in boutiques on Manhattan’s Upper West Side. One will look cool and trendy hung on your wall or set on your fireplace mantel. And since you killed the deer and did the taxidermy work, it will be authentic.

1. Cut/saw off a buck’s head high on the neck just behind the skull (don’t worry about the cape unless you want to keep it and freeze it) and skin the skull. Cut off as much big meat chunks and flesh as you can.

2. Use a knife (and maybe a coat hanger or other heavy wire) to remove the eyeballs, brain, fat, tissue, gristle and cartridge (which I refer to collectively as “junk” from now on) from inside as many of the skull crevices as you can. Be careful around the long nasal cavity; remove as much junk as you can, but don’t crack or break the delicate nose bones, which give a Euro mount real flair.

3. The quickest and most common way to clean the skull is to boil it outside with a propane burner and a big pot of water. Put skull in pot supported by antlers on the top edges, and fill with water until the entire skull is submerged right up to the antler pedicels (see picture). Boil about 4 hours; be sure to check the water level occasionally and add water to the pot to cover the skull as it burns off.

Or, if you’re not in a hurry, forget boiling. Simply fill a large tub with water, immerse the skull down to the antler bases, secure it, and let it sit in an out-of-the-way place for five days to a week (away from the sight and smell of people and pets). Change the water and let it sit again for a few more days, until all the junk turns greenish-gray and falls off. The lower jaw will fall off (discard it with the other junk); you’re left with the top skull with the upper teeth intact, which looks way cool. Rinse the skull with a spray hose. Use your knife, wire and a bristle brush to remove all remaining traces of junk. If some stuff is still caked on, submerge in water again for a few more days. Spray water inside all the cavities until the skull is totally clean.

4. Hang skull sunlight and let it dry out for a day or two. Go buy a bottle of 40 volume peroxide (the strong stuff the ladies and some vain guys use to bleach their hair). Paint it on the skull with a small brush, covering every edge and crevice, and let dry. Don’t get any peroxide on the antlers or it will blotch them. Repeat two or three times until the skull is white as you like it. Dry in sunlight once more.

5. You can mount the skull on a wooden pedestal or plaque with small screws, or simply hang on the wall with a drywall screw. Personally, I think a European whitetail looks best with no plaque. Set the skull on a coffee table or mantel; I’ve got a couple of big skull muleys cocked in room corners. They look awesome and would turn an Upper West Side designer green with envy I bet. 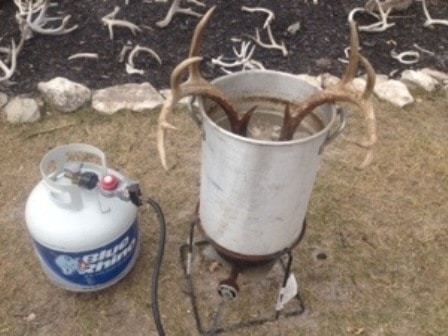