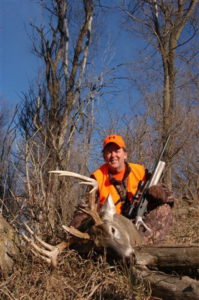 My buddy Mike steered his truck out of the hills and into a moonscape of picked corn and bean fields that sprawled as far as the eye could see. In the yellowish-gray moon glow, those ice fields looked like the world’s largest outdoor hockey rink. No wonder. The mirror thermometer in Mike’s truck read 5 degrees.

He stopped. I stumbled out and trudged toward my cedar blind. Mike grinned and said, “Keep warm.”

The sun rose salmon and blue, and the temperature sunk below zero. At noon I ate a ham sandwich, hard as a brick. Two p.m. and the temp topped out at a balmy 9 degrees. Still I shivered and shook. I left at sundown, having seen six does and a 130-class buck. All in all, a pretty good day.

“Found some deer,” Mike said as I climbed into the truck. My friend had already killed his buck, and now he was helping me out. He’d glassed a bean field in a different area, and he’d hit paydirt. “Must be a few strips of beans still standing on the edge. Ten deer poured in just before dark.”

I was in thaw-out mode and not very talkative, but I nodded good job. Mike turned up the heat and gunned it back to the camp house. As I melted down, I hoped the arctic freeze would hold for a couple more days because the colder it is in December, the more bucks you’ll see around the last scattered food sources. They are worn down from the November rut, and they have to eat to survive.

It warmed up the next day, into the 20s, still plenty cold enough to see deer. Early in the afternoon I got the wind, snuck toward the bean patch and hid in a copse of cedars on a fence row. The first doe popped out of the timber at 3:30. I eased up my shooting sticks and readied my Remington 12-gauge.

Five more does and a couple of so-so bucks slipped out, lowered their heads and started stripping beans like machines. This last bit of feed will be gone… Before I could finish the thought, I caught a flash in the far corner of the field and raised my binoculars. I sucked a cold breath and shivered. For three decades I had obsessed over shooting a drop-tine monster. There he was.

He walked toward the other deer, head slung low and brassy rack glinting. It was high and heavy, 10 points, 170-class. The closer he came the bigger the drop on his left beam became, until it was a thick, 10-inch club, black-bottomed with hardened-on velvet. I shivered again.

At once the does jumped, skittered out of the field and looked my way. Drop didn’t bolt, but he veered off into the woods and looked. Another buck I bet… I cut my eyes to 10 white tines bobbing in the grass 80 yards to my right.

The 160-inch giant (above) was clean—with just a quick peek I could see that his rack didn’t have more than five inches of deductions. He strode out into the field like he owned the joint. Drop Tine was older, but the 10-pointer was the dominant boy in these parts.

I was all over him, crosshairs locked on lungs. Remember, I already had my slugger up and in the sticks, and all I had to do was shift 10 inches right to cover the 10-pointer’s shoulder. Lesson: A big deer can pop up on you anywhere and at anytime, so be ready. The shotgun roared and the chunk of copper smashed shoulder bone. He kicked up his hind end and took off like a shot.

I found him and locked my gloves on his 10-point rack, as big and beautiful as any hunter could hope for. I thought back to the last 10 minutes. I had killed this great animal with the biggest drop-tine I had ever seen looking on, out in the frozen western Iowa. Pretty good way to end deer season.

A lot of you hunt the woods where there is no grain for miles. Still, you’ve got to hone in on the last scraps, like leftover acorns, apples or other mast. Hunt close and you’ll see a few deer, and hopefully a buck. And concentrate on logged areas with woody browse. Say for example you find a cedar swamp with oak ridges above it on either side, or maybe a three-year-old clear-cut within a half-mile. You’ll find some deer there.

Biologists say that for most of the year, whitetails use trees, saplings and brush capable of screening 90 percent of a standing deer at 75 yards or less for security cover. But when the mercury plunges in December in Northern and Midwestern states, many does and bucks shift their movements to bona fide thermal covers scattered throughout their range. There’s far less snow and wind inside a block of pine, cedar or hemlock than on the outside. Studies show that conifers cut the wind’s velocity by 50 percent, and the ambient temperature inside a thicket is 10 to 15 degrees warmer than it is outside in the hardwood timber.

Scientists say that evergreen trees 10 to 25 feet tall, with closed canopies of 50 to 70 percent, provide the best deer cover. Check an aerial photograph for spots like that. The more diverse the habitat and the more thermal covers, the more whitetails it will hold.

In states like Illinois, Iowa and Kansas, where it gets darn cold but not as bitter as in northern Minnesota or New England, whitetails seek out different kinds of thermal cover. During the day, many deer bed in south- or east-facing ravines or on the same directional slopes where the cedars are spotty but not too thick. The animals want some sunrays to hit them and warm them up.

It’s easy to rule out poor covers and hone in on the hot spots. If there’s little or no feed within a mile of a conifer block or swamp, few if any deer will stay there for any length of time. On the other hand, a thicket of cedar or pine near a field with leftover soybean or corn morsels will attract and hold whitetails.

Anywhere in the land, the previous months of hunting pressure have wired the bucks now. You’re apt to see some does and 4-pointers in and around the feed or covers, but many days the surviving mature shooters have gone underground, or so it seems. To get a last shot at one, you have to factor that pressure into your plan.

One of America’s top biologists, Dr. Grant Woods of Missouri, turned me onto some mapping and geographic-analysis studies that he has conducted on hunting properties across the land. It has changed the way I hunt, especially late in the season. In every case, Grant’s data showed that hunters set their stands or blinds within a quarter-mile or so of logging roads, crop fields and similar easy-access areas. The other 90 percent of the land became a sanctuary where a lot of the old bucks go to hide out.

Get an aerial of your land. Mark in red spots where guys have parked their trucks and driven 4-wheelers into the woods since October. Avoid those spots. Check your map for thick “buck holes” a half-mile or farther from the pressure points. Scout them for fresh tracks. Look for terrain funnels nearby. Check for old mast and thickets of honeysuckle or other greens where bucks will browse. Hang a tree stand or take a blind in a strategic spot. It takes time, work and smarts to find and hunt the buck holes, but that is how you fill your tag this time of year.

A few years ago Iowa big-buck hunter Don Kisky hunted a double-drop-tine buck on a corn plot for several evenings. It was cold that December, the kind of cold that hurts, with afternoon highs in the teens and single digits. Kisky knew the whitetails had to feed a lot and early every day, so he kept sitting on the plot, figuring it was just a matter of time until the big deer showed up in shooting light. He never did. Double Drop was smart.

But so is Kisky. He knew of several narrow, south-facing CRP ditches in the general direction the buck was coming from. One afternoon he sneaked back into one of those ravines a couple hundred yards off the feed and set up on the ground. At twilight he looked up and shuddered—Double Drop was walking straight to him! Kisky’s muzzleloader belched smoke, and the buck went down. The rack scored 150, and it was going downhill. The critter was 8 years old!

That hunt taught Kisky a lesson we can all learn from. “Late in the season, don’t get caught up in only hunting only a food source,” he says. “Some old bucks hang up back in cover until dark, regardless of how cold, snowy and miserable it is. Sometimes you’ve got to go for it and sneak close to a thermal cover where you think a big deer beds. You can shoot a giant that way.” 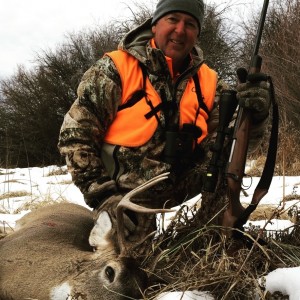