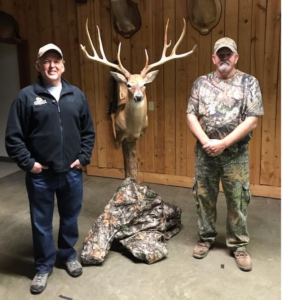 Prologue: Last Saturday my camera crew and I traveled down to Mecklenburg County, Va., and met Jim Wilson, who back in 2012 shot this incredible buck that gross-scored 186 and change. Most distinctive, as you can see, is the width of the rack—32 inches! This is the widest rack ever recorded in Virginia, and the 7th widest whitetail rack ever documented in the U.S.

You’ll see and hear Jim’s interview on a new episode of Big Deer TV on Sportsman Channel in 2020. For now, here is the story of Mr. Wide in Jim’s words:

August 2012. I had been discarding apples from the tree in my yard in the field behind my house. I noticed the apples were disappearing and there were more and more deer tracks, so I put a trail camera up back there. I set up the Moultrie without setting the time and date.

The very first night I got 6 different bucks on camera and one was huge. He was in velvet and looked like nothing I had ever seen before. I carried the picture to work and everyone said it was something weird off the Internet because the date and time were not right.

It took a while to get another pic of this buck, but the next time I did he had started to shed velvet and was in a different location. I got about 50 more pictures of him and then he disappeared. It wasn’t until he started making scrapes that I got him on camera again.

I live on a 27-acre farm that has about a 5-acre patch of oaks, mostly white oak. There are 2 ridges through that 5 acres, and the buck was making rubs and scrapes on both of them. I had him on cam only at night and just before dawn. 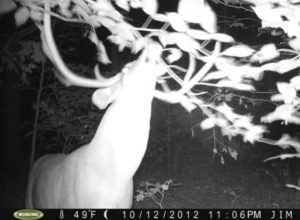 On the first day of bow season a friend and I set up, hopeful that one of us would get to see the buck or even take him. I saw 6-point, and Bobby saw a couple of does and a 3-point.

I hunted the buck when the wind was right for the next 2 weeks and saw him twice, both times in the early morning in that patch of oaks. But he wasn’t close enough to shoot with my crossbow either time.

I passed two 8-pointers in the 17- to 18-inch-wide range. One day as I climbed down from my stand without seeing the big boy, I was mad at myself for passing one of those bucks. Glad now I let them walk!

Then Hurricane Sandy came to town and messed up my hunting for a couple of days. On Oct. 30th I elected to hunt in the patch of oaks in the evening. I parked at my pond about 300 yards from my stand, applied doe in heat scent to my boots and walked to my ladder stand.

It was about 4:00 as I settled into the stand. The woods were still soaked with rain from Sandy. At 5:00 I looked up and here came the giant buck, trotting on the same path I had walked in on, with his nose on the ground! He was about 50 yards and closing fast, headed right to my trail cam. The bad thing, he would be in cover when he was in good range. Having only a few seconds to make a decision, I elected to try him at 28 yards, quartering slightly to me.

As I picked up my crossbow, it lightly touched and pinged the stand; the deer stopped in his tracks and looked around for what seemed like forever (about 10 seconds) and then proceeded on. At 28 yards I grunted, he stopped and I let the arrow fly. It hit a small limb just as it got to the deer and fluttered slightly, but it still passed clean through him. He spun around and left with his tail down. It was then that the rush hit me and the entire tree stand was rattling as hard as I was shaking. After about 10 minutes I climbed down and went to the arrow and saw it had good blood.

Here was my dilemma–I am semi-color blind and have a very hard time seeing blood in the woods. And it was wet on top of that. I did find a spot of foam and marked it. I walked out to my truck and called a friend, B.J. Mull, and he came to help track.

We stood at my truck forever (30 minutes) and plotted out a game plan. We took B.J’s dog, Bailey, which was in training to be a blood-tracking dog, with us on a lead. We walked to the spot and B.J. said, “Man, there is blood everywhere, this deer could not have gone far!” We tracked about 50 yards and found the buck where he ran out of blood. That is when the high fives and picture time started. 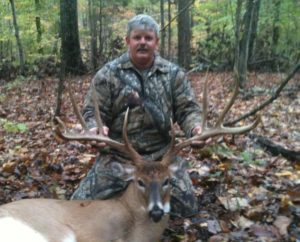 Since then the 32-inch-wide buck has been all over the Internet and Facebook. I guess I have had my moment in the spotlight. But I am just glad the good Lord allowed me the chance to harvest this wonderful deer, my buck of a lifetime. Thanks, Jim Wilson

Congrats Jim, one of the coolest bucks ever from our Old Dominion! It will be a great segment on Big Deer TV next summer.