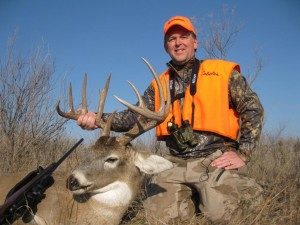 Last weekend I wrote an article for Outdoorlife.com entitled, Why Post-Rut is the New Best Time to Hunt Whitetails. In it I wrote:

Each year I hunt in several states in early to mid-December, from Kansas to Oklahoma to Virginia. I am witnessing good to great deer movement, and more late rutting activity than ever before. Such good activity, in fact, that the early post-rut is becoming my most productive time to hunt.

In early December bucks are tired and battered, but still running on a last jolt of testosterone. Sometimes a buck makes fresh rubs, so look for them. While bucks generally don’t paw scrapes this late, they often cruise back through creek bottoms and draws where they scraped and rubbed trees a month ago, and hooked up with does. Go back and hunt a stand that you hung in a sign-blazed funnel in early November, you might catch a buck cruising there now.  Bucks are still rutty, prowling and looking for the last receptive does of the year.

Two days later, as that article was being posted, I was in northeastern Oklahoma hunting the post rut again.

First day in the box blind I saw a few does and 9 small bucks. Typical of the post-rutting period, some of the deer were merely feeding, and some of the bucks were exhibiting tepid late rutting activity, not so much chasing does, but checking them and pushing them around.

I was hunting with 2 buddies, and things were super slow at their stands that first day. I think they spotted 3 does and a fawn between them. This is also typical of the post-rut; there can be a lot of deer activity in one hot area, while other spots are stone cold.

In early December you have to be mobile and find a hot spot and stick with it, and that is what I did. There were fresh new rubs in the area, and a ton of old scrapes. I had seen a lot of deer there the previous day. I decided to hunt the box blind out for the last 4 days of my hunt.

It didn’t take that long. On the second afternoon, with another breathtaking sunset coming on, a sweet 10-pointer nudged a doe across the power-line cut I was watching, and I was able to drop him with my Marlin 336 in .35 Remington. 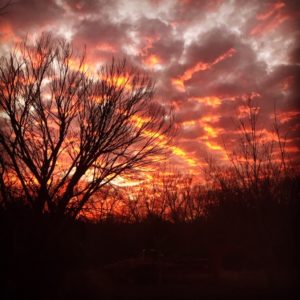 How about my buddies? They moved stands, and one shot a nice 8-pointer the third morning. On the last day, Chuck smoked a thick-beamed 145-inch 10-pointer pushing a doe at 1:15 p.m. Yes, the early post-rut hunting can be that good! You’ll see all teh action on a new episode of BIG DEER TV nest year.

We are pushing into mid-December now, and the late rutting activity of the last 10 days is dwindling. But you still might catch a buck pushing a doe this weekend, so keep at it if you’ve still got a tag left.

And from mid-December on consider this strategy I also laid out in that Outdoor Life post:

Your strategy from early December through the end of season should center around the limited food sources that remain for deer. Both does and bucks are run down from the primary rut, and they have to eat. The colder (and snowier) it is in December, the harder deer move to and from the feed, and the more visible they will be in daylight.

You’ll see the most animals if you have access to corn and soybeans, or alfalfa in the West. A patch of standing corn is especially good, as it provides both eats and cover for deer.

In a harvested bean field, scout edges and corners where a few strips of standing beans were missed by harvest. Those will be a magnet for deer. One chilly December evening, I killed one of my biggest Iowa bucks, a 150-inch 10-point, by finding a few leftover beans and taking a ground setup nearby.

The less gun pressure in and around a field thus far during the hunting season, the more bucks you will see active in daylight. Pray for snow and temps from the teens to mid-30s. A hungry buck might pop out into the crops morning or afternoon, or even briefly in the middle of the day. Bundle up and be out there till the end.

If you hunt big woods, public or private, miles from the nearest crops you won’t see nearly as many deer, none some days. To have a chance of punching your buck tag you must find and watch what little food/cover mix is left for a buck: greenery on the edge of a clear-cut or power line, second-growth oak flat near a cedar swamp (maybe a few last nuts and green vines and leaves), grape or honeysuckle thicket…you get the picture. Set a stand or make a blind on the fringe of a pine, cedar or honeysuckle thicket. Bucks love to travel a green edge in the woods.