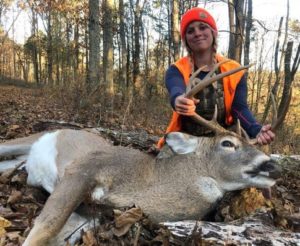 The Kentucky Department of Fish and Wildlife announced that (gun) hunters harvested 107,039 deer during the 16-day season, breaking the previous record of 106,804 that was set last season.

Hunters shot 35,143 deer on opening weekend, 19,234 during the second weekend and 11,576 during the third weekend, with the second- and third-weekend hauls also representing weekend records.

Officials said a poor mast crop this fall led to deer moving more and being more visible. Also, the weather during the November gun season was ideal, not too warm and not too cold.

The modern gun season was recently extended from 10 days to 16 days in much of the southeastern portion of the state, and that lead to more opportunities for hunters.

Kentucky officials expect the good hunting season to continue during December’s muzzleloader season, which runs from Dec. 14 to Dec. 22.