Alabama: What’s Up With Deer Warts?

Frightening-looking growths are popping up on Alabama’s white-tailed deer, and state wildlife officials say they have an explanation for the stomach-turning affliction.

The Alabama Wildlife and Freshwater Fisheries Division acknowledged the issue Tuesday, sharing photos of a buck found southeast of Tuscaloosa with bubble-like clusters on its head, neck and shoulders. 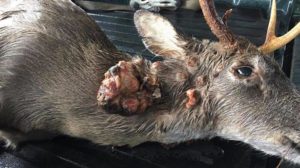 The growths are a type of virus known as “deer warts,” and the division explained on its Facebook page:

This deer had numerous cutaneous fibromas, or “deer warts”, on its head and neck. Cutaneous fibromas are hairless tumors found on the skin of white-tailed deer. They are caused by a virus and are almost always temporary. Deer may have only one or two of the fibromas, or the growths can be much more numerous and even occur in clumps, such as these. Transmission from deer to deer is thought to occur from biting insects and possibly by direct contact with contaminated materials to an abrasion in the skin. Neither farm animals nor humans are susceptible to the deer’s cutaneous fibroma virus. Cutaneous fibromas are common and not a threat to deer populations. Deer with warts may look icky, but the meat is still fine. Only a large tumor with secondary bacterial infection (i.e., oozing pus) would cause meat to be unfit for human consumption.

State officials didn’t say if the condition is more widespread in Alabama than in years past. Deer warts are not just a Southern thing, as some whitetails across the country can and do get the nasty-looking affliction.