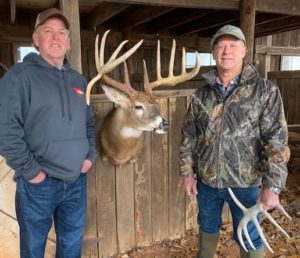 One of our most popular segments on Big Deer TV is “American Deer Hunter,” in which we interview hunters from across the country about the dream bucks they shot. Their stories are genuine, fascinating and full of lessons that can help you become a better hunter. Last fall we caught up Wayne Mills and filmed the story of the drop-tine giant he shot years back. It will appear on a new episode of my show in summer 2020.

Wayne Mills had hunted his lease in Culpeper County, Virginia three days a week since the opening of archery season in October. In late summer and early fall, he had gotten trail camera shots of two really nice bucks, so he had passed on several borderline shooters. On November 6th he spotted a 10-pointer chasing does. “I passed him too at 35 yards, but decided I would take him if he gave me another chance,” he said.

As Wayne watched the buck running back and forth in the woods, he heard a grunt and looked up. A doe was running down an old road with a massive buck on her tail! She bolted into a meadow; a spike and the 10-pointer point took off after her, and the monster followed. “I only got a glimpse of him, but I knew he was the one,” Wayne said.

He hunted the stand a few more days, but didn’t see “the one” again. On November 12, a front came through and changed the wind. Wayne slipped over to another tree stand that overlooked a mowed trail through planted pines about 100 yards from where he’d seen the giant last week. At daybreak, he did a little grunting and waited. At 7:07 he spotted a deer behind a pine tree and raised his binoculars. “When he stepped out I saw tall tines and mass,” Wayne said. He settled the crosshairs on the buck’s shoulder, and his muzzleloader boomed.

The buck ran directly away and around and through the pines. Wayne watched the deer for as long as he could, and thought he heard him crash. He went to the spot where the animal had been standing–no blood. He went to the last place he had seen the deer and started working the line the animal had fled. “He was lying under a pine about 30 yards away, and as I got closer I saw the drop,” Wayne said. “I pulled his head up and said, Lord what have I got here?

Get this. One winter day Wayne’s friend, John Meehan, found the buck’s last drop shed about ¼-mile from where Wayne killed the giant 2 years and 3 months earlier!

“Incredible, it had to be the shed from the winter of 2007-08 (dropped in Jan. 2008),” says Wayne. “No sign of rodent damage. Symmetry is perfect. The antler just added some length to the main beam and mass.”