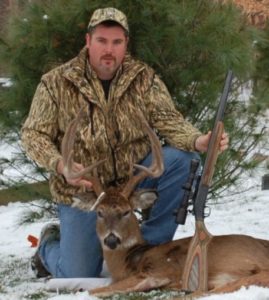 From the Big Deer archives:

Mike: Just wanted to pass along a picture of a nice whitetail I killed in Ohio.

I know you get a ton of pictures from hunters, but I wanted to send you this one as proof of what you preach. I shot this buck after a front passed through and it turned cold. I’ve heard you say on your show how you like to hunt after a cold front goes through. Well, I have to agree with you.

This buck had not been seen in the earlier archery season or the prior 4 days of our gun season. When the front passed through and the temperature dropped he got up and made his mistake. Thanks for the great show.—Paul

Paul, thanks for the note, great looking buck man! Love those couple days AFTER the first major cold front passes through and drops the temp 20 to 40 degrees. You’ll generally have to deal with some NW wind for a day or two, but that is OK, the bucks will move. Looks a like it snow a skiff on Paul’s hunt, making things even better!