How To Shoot A Buck With Your Bow 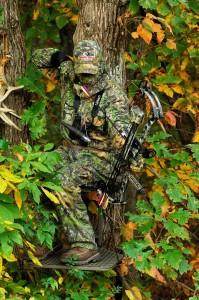 Stay sharp: It’s tough to keep your edge for hours when you haven’t seen a buck for a while. But do it. The minute you drop your guard and start daydreaming a monster will pop up within 50 yards. You never want that.

When a big deer surprises you, you tend to get rattled, make a foolish move and spook him. So concentrate as much as you can. Scan the woods and try to pick up the flash of antlers or hide as far out you as can. That way you’ll have time to calm your nerves, stand up, shift into position and plan your draw and shot.

Read A Buck: You glimpse a stud 120 yards out, angling toward your stand, taking his sweet time, rack big and brassy in the sun. Do not, I repeat, do not take your eyes off that deer for even a second.

If you look over to grab your bow or pick up your binoculars, you might look back up and he’ll be gone—down in a ditch, in a thicket, whatever. It might take you a couple of frantic minutes to pick him up again. Heck, you might never see him again.

So watch that buck and peek 20 to 40 yards ahead of him for clear shooting holes and lanes in the cover. Take a quick read of the terrain and brush, and try to predict where and how you’ll shoot the critter.

Move It: Most of the time a hunt works out so that a buck walks into a thicket…dips into a ditch…sticks his head behind a tree…or turns to look over his back trail at another deer, if just for an instant. Whatever the case, you move when his eyes are shielded.

Hug the tree, stand up, grab your bow and turn your body toward the deer. Make one quick, smooth and confident move. Don’t be tentative.

Fancy Footwork: I’ll assume you’re familiar with the basic mechanics of a hitting a baseball. Position your feet on a stand’s platform like a right-handed batter with a slightly open stance. You’re in perfect shooting position, body pointed left and toward an incoming buck. Pan with the deer as he walks into the front-left arc. Fine-tune your position and draw when you can.

Time to Draw: When a buck walks or trots on a line for your stand and a shooting lane within 30 yards, draw your bow as soon as you can, perhaps when he steps behind a tree 40 to 50 yards out. That will give you enough time—but not too much time—to calm your nerves, settle your bow, pick the right pin and kill the deer when he walks past in a few seconds.

Things are different when a buck takes his sweet time walking toward your stand, meandering and stopping here and there to browse or rub his eyes and pre-orbital scent on dangling branches. Resist the urge to draw too early.

You don’t want to come to full pull about the time he hangs up 50 or 60 yards out. If he tarries too long, you’ll quiver and shake until you can hold the poundage no more. If you have to let down and then draw again, you’re almost sure to get busted.

In this scenario, let a deer stroll smack into shooting range, and then take your chances and draw. If cover is sparse, let the deer walk a few yards past your stand so that he is looking and quartering away. 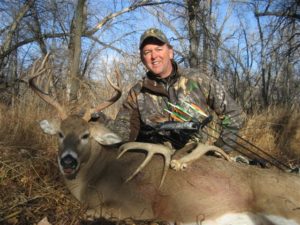 Close the Sale: Unless you practice a lot at long ranges and are a very accomplished shot, you shouldn’t drop the bowstring until a buck is inside 40 yards…30 yards is better…inside 25 yards is best. The effects of a whitetail hearing the twang of a bowstring and then “jumping” that sound are magnified at 35 yards and beyond. The bottom line: The closer the buck the better the shot.

Always shoot for quick, clean lung kills. That means sending an arrow only when a buck is broadside, quartering away or quartering slightly to. That’s it!

On a broadside animal, aim for the dark crease just behind his front leg. Focus on a tiny patch of hide a third of the way up the deer’s body. If he stands still at the shot, you’ll drill the lungs and maybe clip the top of the heart. If he ducks at the sound of your bow going off, you center punch or hit high lungs.

On a quartering-away shot remember to move your sight pin back on the ribs so you won’t shoot a buck too far forward in the bony, meaty shoulder. The more severe the going-away angle, the farther back on the ribs you need to aim to punch an arrow forward into the lungs.

Calm your nerves, pull an arrow and anchor, lock in on the right pin and release in one smooth motion. Fight the urge to drop your bow—hold it at arm’s length and steady, and follow through with the shot.

Watch the fletching disappear into a big deer’s lungs, there’s no better feeling.