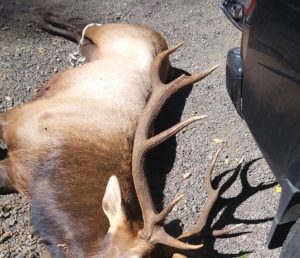 Oregon’s KATU reports that on Saturday a 66-year-old bowhunter shot a bull elk, but could not find it before dark. When he returned the next morning, the wounded animal charged and killed him, apparently by impaling an antler in his neck.

This tragic news got me to thinking about something I have written and blogged about several times over the years: A “dead” deer can kill you, so be careful every time you walk up on a buck (or elk or any animal) you just shot.

Every time I blog that, some tough guy sends me a snide comment of how ridiculous that sounds, and what a wuss I must be.

Well, don’t blow it off. This is admittedly rare, but it can happen. Last I heard of a whitetail buck killing a hunter was in Arkansas in 2019. Now this elk incident.

To prevent this from happening to you, be vigilant and smart: