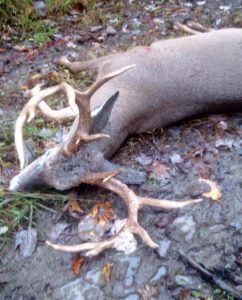 I have blogged several times over the years that a “dead deer can kill you,” so be careful when you walk up on a buck you just shot. Every time I do, some tough guys send me snide comments of how ridiculous that sounds, and what a wuss I must be.

“I’ve worked for the Game and Fish Commission for 20 years, and it’s one of the stranger things that’s happened,” said Keith Stephens, the Chief of Communications with the agency.

When he walked up to the buck, it attacked.

“It got back up, and he had several puncture wounds on his body,” Stephens said.

It is unclear whether Mr. Alexander died from the wounds or from a heart attack caused by the attack. Prayers to his family.

This is a tragedy and an admittedly rare one, but it can happen.